Officially this car can manage up to 270km. I wasn’t getting anything like that figure 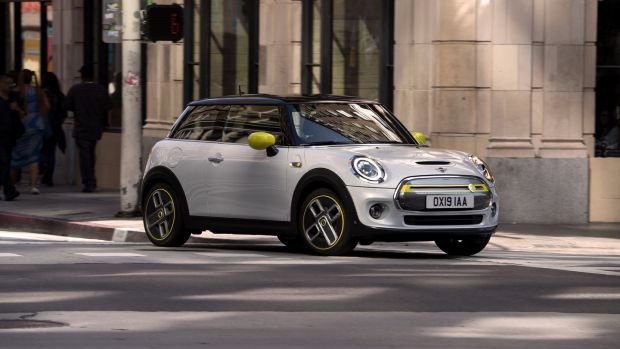 The Mini would seem like the ideal template for an electric car.

It’s got a reputation for snappy handling, smart cornering. It’s largely meant as an urban runaround – although I’ve driven from Mizen Head to Malin Head in one without complaint. It’s also got a fashionable following, which won’t baulk as much at the price premium you pay for having a big battery pack underneath your feet.

That’s if there was a big battery there. The biggest issue with this new all-electric Mini is that the battery isn’t big enough. I’m not talking about its physical size, though that was undoubtedly dictated by the need to keep the proportions in line with its fossil-fuelled sibling. Let’s address the elephant in the electric Mini: the biggest issue here is the range.

On a full charge, the official line is this car can manage up to 270km. I wasn’t getting anything like that figure. Charging it to full I was always offered a maximum range of under 200km and that topline figure quickly plummeted when you got on the road.

The corporate line from Mini executives is clear: you very rarely need the extra range. Most motorists are suburban commuters, barely breaking 30km a day. And 200km will bring you most places you want to go. When you’re there, pop over to the growing network of fast-chargers for a top-up, have a coffee and you’ll be fine for the journey home.

And the argument is backed by reams of data and decks of PowerPoint charts. I’ve learned the hard way that you don’t debate this issue with a German engineer unless you are ready to be bombarded with statistics for six hours.

While I’m a firm supporter of the electric revolution, some of these electric car evangelists would give scientologists a run for their money. But what’s it like out on the real life road?

Well, it does seem like the data stands up to scrutiny. A quick poll found that most people I know don’t drive more than 70km a day, pre-Covid-19 lockdown of course.

And you don’t need a degree in physics to spot the benefits of finding a sweet spot between the useful range and the battery size. The powerbanks for electric cars are bulky, heavy and expensive. Every time you add to the battery to give greater range, you add cost and weight.

And weight really matters in electric cars. Why waste energy – and money – humping around heavy battery cells all the time, on the off-chance you may one day call upon them to get you an extra 30km or so? It’s like being single but buying a seven-seater on the off-chance that some day you may become the designated driver of the local five-a-side team.

In this context the Mini’s range starts to make sense. Mini engineers opted to use a 32.6kWh battery pack for their new car. To put that in context, Renault’s latest all-electric Zoe supermini has a 50kWh pack, while the Hyundai Kona comes with a 64kWh pack. But by opting for the smaller pack they kept the excess weight down: the electric Mini weighs just 145kg heavier than the equivalent petrol-powered Mini Cooper S automatic.

And living with it for several days was a breeze. It’s easy to see how you could fall into a recharging routine. For the first few days I drove it like any other car and never plugged it in once.

And like many small electric cars, it’s incredible fun, with addictive torque in Sport mode. The instant surge of power from a standing start still puts a smile on my face every time I drive electric, even after nearly a decade of testing these cars. Sure, you would probably become more sensible with your energy usage and pull away smoothly from the junction or when overtaking. But it’s impossible to resist the urge to surge, just like you get when behind the wheel of a supercar. It’s not quite a rival for Tesla’s Ludicrous mode, but is certainly quick.

The driving characteristics are pure Mini, with engaging and informative steering and responsive handling. The ride quality does suffer a little, perhaps due to the extra weight, but that’s made up for by the cornering ability, greatly helped by the lower centre of gravity that also keeps bodyroll at bay.

Inside there’s a greater nod towards the digital age via the ‘dinnerplate’ screen in centre, while it also has a new digital display for the driver. You could get two children in the back seat but it’s not easy to get in or out. There’s a decent boot of 211 litres, extending to 731 litres with the rear seats down. That’s not great for a mid-range hatchback, but it’s no worse than what you get with the regular three-door Minis.

I can see how a weekly – or even monthly – visit to a fast-charger is enough to leave me close to the maximum range at all times, and I wouldn’t have to plug it in at home every night. Many people will, but a few of us lazier souls will not

After a few days, when the car was suggesting the range had fallen below 30km it was time to either plug it in overnight or give it a fast top-up. So a morning visit to a local filling station was in order. A quick swipe of the ESB charge card on the side of the fast charger and things started humming. By the time I had wandered over to the forecourt shop, bought a coffee and a paper, the battery charge was well over 50 per cent. With Covid-19 restrictions in place I returned to the car, finished my coffee and was barely moving from the news pages to features when the battery hit 92 per cent. So 30 seconds later, car unplugged and I was back on the road. For the rest of my time with this Mini I simply topped up the charge at home on a slow charger.

I can see how a weekly – or even monthly – visit to a fast-charger is enough to leave me close to the maximum range at all times, and I wouldn’t have to plug it in at home every night. Many people will, but a few of us lazier souls will not.

Aside from range, the other issue with the Mini, of course, is the price. And here this Mini starts to lose its sparkle. Prices start at just under €28,000, which is actually quite competitive on paper. This is a premium supermini after all, and its heritage and cachet means it is will keep its value well when it comes time to resell. It’s also a perceptively well-built car.

Opting for mid-range with rear parking sensors and camera, heated seats and driving pack, will bring the price to €30,695: the best buy of the bunch.

Go for the top-level and while you get features like front parking sensors, a Harmon Kardon sound system, a Panoramic sunroof and the 8.8-inch infotainment touch screen, the price hits €35,695. Then throw on a few extras and you find yourself behind the wheel of a car similar to the test vehicle, which carried an eye-watering price of €44,814.

The question is how much you value the reassurance of extra range. You need to weigh up the brand appeal, trademark styling and premium appeal against more functionality with better range on offer from rivals.

A few competitors come to mind, most notably the similarly-sized Renault Zoe with its 50kW battery pack starting at €27,000 offering a range of over 300km. Spend €30,000 and several mid-range all-electric hatchback/crossover models are on offer, with more interior space and 60kW battery packs similarly pushing ranges towards 300km-plus. None have the premium appeal of the Mini but they are more practical.

Effectively, if you have €30,000 to spend you can you choose a premium car with street cred that will get you 170km or so between charges, or a more mainstream rival that will get close to double that in range.

BMW, like a growing number of other car firms, believes the range anxiety issue is over and people have moved on from there thanks to the burgeoning recharging network and a barrage of evidence showing they never regularly drive more than 50km a day.

Yet again I fear the auto executives are much further down the digital road than the car-buying public. In their eagerness to turn the car into a smartphone on wheels they are leaving loads of motorists in the lay-by.

In the face of such massive automotive revolutions, people like to play it safe. And that means having that extra bit of range, even if it largely goes unused. I may be wrong, but I think that’s what will hold back this Mini on the market, at least for now.