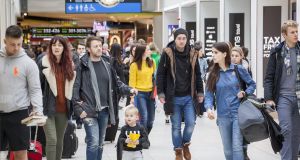 About 27.8 million people began or ended their journeys at Dublin Airport, while another 1.8 million used it to transfer between European and transatlantic flights

Growth in travellers on long-haul and continental European routes led to a seventh consecutive year of growth at the Republic’s biggest airport.

Dublin Airport owner, State-company DAA, said on Tuesday that passenger numbers grew 6 per cent in 2017 to “a record-breaking” 29.6 million.

Short-haul traffic grew 4 per cent to 25.3 million while the number of people flying long distances rose 19 per cent to 4.3 million.

About 27.8 million people began or ended their journeys at Dublin Airport, while another 1.8 million used it to transfer between European and transatlantic flights.

The number of people flying between Dublin and continental Europe grew 7 per cent to 15.2 million, while traffic on transatlantic routes rose 20 per cent to 3.5 million.

Business on Brexit-hit UK routes managed to increase by 1 per cent to 10 million.

Domestic services and flights to destinations such as the Middle East and Africa accounted for the remaining 940,000 passengers.

“We saw growth from all of our major airline customers during the year,” he added.

“We are focused on attracting new airlines to Dublin and also on helping our existing airlines to grow their business here.”