Cantillon: Despite conciliatory tone, US president not going back on campaign promises 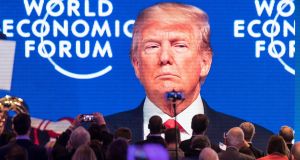 This week, for the first time in 18 years, a sitting president of the United States attended the World Economic Forum at Davos. A year after Donald Trump promised to put America first in his apocalyptic inauguration speech, his address at Davos was highly anticipated. Would the businessman-turned-politician use the forum to hit out at free trade and globalisation? Or would this be the old Donald Trump, comfortable in the world of big money and background deals?

In the end, Trump surprised many by taking a more conciliatory tone. America First does not mean America Alone, he said; free trade needs to be “fair and reciprocal”. Most of all, a strong America benefits everyone, he argued. Whether his comments hold water is another matter.

Donald Trump’s campaign promises were far from empty bluster. Rather, the 45th president of the United States has followed through on many of his campaign pledges on trade.

Just this week the United States unveiled new trade measures against China and South Korea, slapping tariffs on solar panels and washing machines. Action on Chinese steel and aluminum exports is expected next.

As the US president and his top officials schmoozed in Davos, negotiations on reopening Nafta – the trade deal that governs trade relations between the US, Canada and Mexico – were taking place in Montreal. Trade ministers are due there on Monday.

Similarly, 11 countries are forging ahead with the Trans Pacific Partnership (TPP) after the US pulled out of the deal, though the US president said on Friday that he may be willing to negotiate trade deals with the TPP countries either bilaterally or as a bloc.

Further insight into the president’s thinking is likely next week when he is due to give another major address: the State of the Union speech. The annual speech delivered by the sitting president to Congress each year typically serves as a blueprint for the president’s policy priorities and focus for the year ahead. With tax reform out of the way, trade may well be the next big focus for the Trump administration’s economic team.