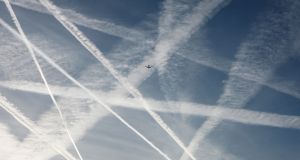 Airplane flying through a sky full of vapour trails

Chinese group HNA owns 52 per cent of Bohai Leasing, which holds 70 per cent of Dublin-headquartered Avolon, one the biggest players in the global aircraft leasing business.

A $50 billion acquisition spree between 2015 and 2017 left HNA with huge debts, forcing it to seek a bailout from the Chinese state last year.

HNA said in a social media post on Friday that a court in Hainan, China, had told the group that its creditors had sought to place it in bankruptcy as the business was unable to pay its debts.

The company added that it would co-operate with the courts. Avolon said on Friday that it would not comment on the latest developments with HNA.

The Chinese group’s flagship business is Hainan Airlines, which operated a Dublin-Beijing service for several months in 2019, but it has stakes in several carriers.

However, its spending drew scrutiny from China’s central government and overseas regulators.

As concerns grew over its mounting debts it sold assets such as airport services company Swissport and electronics distributors Ingram Micro to focus on its airline and tourism business.

It had 706.7 billion yuan (€90 billion) in debts at the end of June 2019, the last bond report it made public that year showed. It has not given an update since.

Its largest creditor is the state-backed China Development Bank (CDB), which also chairs the company’s creditor committee. CDB did not immediately respond to a request for comment.

Civil Aviation Administration of China news, the service run by the Chinese air travel regulator, said HNA would reduce debt through measures such as converting debt to equity or rollovers to guarantee investors’ interests. It also hopes to attract fresh equity from new strategic investors.

It said three of HNA’s listed units had applied for bankruptcy and restructuring, which would require approvals from China’s securities regulator and courts. HNA declined to comment.

Last week, the company said it was moving to the next stage of resolving its multi-year liquidity crisis as the government-led team had finished its due diligence.

Gu Gang, a Chinese Communist Party official who resigned as HNA’s executive chairman and now leads the government-led working group appointed to rescue the business, told the group’s employees last week that it had “fumbled in the dark” for three years.

“But this time through the work in the past year, we can finally see the light coming through the end of the tunnel ... It is only through bankruptcy and restructuring that we can be reborn,” he added. - Additional reporting Reuters

3 Euronext Dublin pulled down by Ryanair after profit warning

9 NordicTrack S22i Studio Cycle: An expensive way to cut down on the cabin fever

10 Profits fall at maker of Ariel detergent and Gillette razors