Norwegian seeks to hand back 36 aircraft 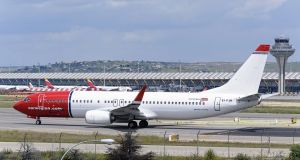 Troubled airline Norwegian Air Shuttle (NAS) is seeking to hand back 36 aircraft to lessors as it seeks to cut its fleet in an overhaul of the business.

NAS and four Irish subsidiaries have Irish High Court protection from creditors while examiner Kieran Wallace of KPMG puts together a rescue plan for the Scandinavian carrier.

The High Court heard on Thursday that the group wanted to repudiate leases on 36 aircraft held by the Irish-registered companies.

The airline is seeking to cut its fleet, among other measures to rescue the business that also include raising up to €500 million.

Lawyers for lessors, including Rossa Fanning SC for Irish giant Aercap, Goshawk and Engine Lease Finance Group, argued that the companies had not submitted enough evidence to support the application to the court.

“The evidence is threadbare; it’s devoid of any detail on why these leases are unduly onerous and why the company cannot continue with them,” he said.

However, Brian Kennedy, the companies’ senior counsel, argued that they would have faced different criticisms if they had made multiple submissions.

Mr Kennedy pointed out that the companies wanted the issue dealt with as expeditiously as possible.

Mr Justice Michael Quinn adjourned the matter until Thursday, February 4th. He noted that the court could deal with issues raised by lessors and other parties then.

Mr Kennedy did not rule out the possibility that the examinership could be extended for a further 50 days.

Examinerships run for an initial 70 days, but the courts can extend them to 100 days and in some circumstances for a further 50.

The High Court last week extended Norwegian’s process to February 25th, which will bring it to 100 days. The group originally sought High Court protection in November.

The Norwegian carrier opted to use the Irish courts, as the group leases its aircraft through subsidiaries based here.

NAS told creditors at a meeting in Oslo this week that it hoped to have exited the Irish examinership and a simultaneous process in Norway in April.

The airline has already said it intends to axe its long-haul services. It planned to cut its fleet by more than half to 68 from 140 at the time it entered examinership.

If it emerges from the process, the airline plans to have 40 aircraft based in Europe’s Nordic countries next year with a further 28 operating elsewhere in the continent. It may have up to 53 in service this summer, depending on Covid-19 travel restrictions.

Protego to create 60 new jobs after forming partnership with Repay 14:59
Sports performance group has an Irish heartbeat but a global pulse 14:00
EU likely to approve J&J vaccine in early March 13:53
Household deposits reach yet another historic high 12:51
Cliff Taylor: Some have done a lot better than others during Covid 12:44