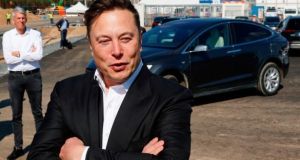 Tesla is still struggling to generate consistent profit margins from selling its electric cars, leaving it reliant on sales of regulatory credits to lift its profits, according to figures released late on Wednesday.

The US electric car maker reported results that topped Wall Street’s expectations for revenue growth in the final quarter of last year but failed to hit forecasts for earnings, sending its shares lower in after-hours trading.

The shortfall followed a shift in sales towards Tesla’s lower-priced Model 3 and Y. The company also blamed “supply chain instability and pandemic inefficiencies”, and said it faced higher costs from starting production of a new version of its Model S - a car that Elon Musk, chief executive, claimed would be “the fastest accelerating car that has ever been allowed to go on a road in history” when it starts shipping next month.

Tesla’s profit margins in the latest quarter were also held down by $267million in stock-based compensation paid to Mr Musk, tied to the giant pay package that was approved by shareholders three years ago.

The weaker margins highlight the urgency for Tesla of lifting global sales before a new wave of competition hits the electric car market, said Nicholas Hyett, an analyst at Hargreaves Lansdown. Profits from sales of regulatory credits are also likely to fall, adding to the pressure, he added.

In the latest period Tesla generated $401million from sales of credits, accounting for the bulk of its $575million of operating profits. Tesla sells carbon credits to other carmakers that need to comply with environmental regulations.

Meanwhile, Mr Musk told analysts that he believed the massive run-up in Tesla’s share price over the past year was justified by the company’s autonomous vehicle software - and that, if anything, both stock market investors and car buyers were underestimating the importance of the technology.

Tesla’s shares have risen tenfold since March last year to value the company at $816bn. The strong rally was underpinned by its success at maintaining its production and sales growth last year, at a time when other carmakers were struggling - though the latest earnings news trimmed 5 per cent from its share price late on Wednesday.

According to Mr Musk, even a conservative estimate suggested self-driving capability would make Tesla cars “twice as useful”, as they become robotaxis and generate income for their owners. That meant that, based on car sales of “$50billion or $60billion”, the software could double Tesla’s revenues, with all the extra money showing through as profit, the Tesla chief said.

“I think there is a way to justify the valuation of the company where it is with just the cars and nothing else,” he added.

Mr Musk also claimed Tesla would perfect its self-driving software this year, and that it had had “preliminary discussions” about licensing the technology to other carmakers once it has been proven to work. The company has failed to hit deadlines in previous years when Mr Musk has made similar promises.

The carmaker had already reported a solid fourth quarter for new vehicle deliveries, contributing to a strong share price rally at the start of the year that has extended the gains from 2020. It posted better than forecast revenues of $10.74billion for the quarter, up 46 per cent year on year. However, pro forma earnings per share rose 95 per cent, to 80 cents, short of the $1.01 Wall Street had been expecting.

Its operating profit margin of 5.4 per cent was up from 4.9 per cent a year ago, but down from the 9.2 per cent of the third quarter of 2020. Tesla’s quarterly net income rose to $270million from $105million the year before. Based on formal accounting rules, including stock-based compensation, earnings rose 118 per cent to 24 cents a share.