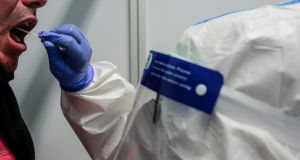 Airports are introducing pre-departure screening as the Republic implements a new EU system for air travel aimed at ending restrictions and quarantines, but tests cost passengers at least €150.

Aviation unions warned the Joint Oreachtas Committee on Transport and Communications Networks that these charges would slow air travel’s recovery.

“With a cost per passenger starting at €149 per test, this may inhibit any real progress, as it presents a significant cost barrier to people weighing up their travel plans,” said Matt Staunton, deputy general secretary of trade union Fórsa.

He noted that German airports were using tests that cost about €5 each and took minutes to produce a result. PCR tests take several hours to process.

Capt Cullen said his union accepted that PCR was Covid screening’s gold standard. However, he argued that mandatory “silver standard” antigen tests for all passengers, air crews and airport workers was a better way of managing the virus risk than relying on travellers to voluntarily choose PCR screening.

Capt Cullen stressed that nothing else would “replace the number of passengers that normally fly in and out of Ireland every year” or the €10 billion annually that foreign visitors spend here.

Eamon Ryan, the Minister for Transport, said last week that health experts continued to advise the Government that the faster, cheaper tests were not suitable for safeguarding travellers. He indicated that policy could change if the advice did also.

Siptu, craft union Connect and Fórsa want the Government to tailor the wage support scheme so industry workers hit by the crisis get 85 per cent of normal net pay.

They also seek guarantees that employers will not force redundancy on any workers while those companies benefit from the scheme, or change any terms and conditions without collective agreement.

“There are thousands of workers across the country who are earning a fraction of what they earned pre-Covid, hundreds more on layoff, hundreds out of employment and all fearful for their futures,” Mr McGowan said.

Unions repeated calls for the Government to re-integrate Shannon Airport with the Dublin Airport Authority. They argue that splitting the mid-western gateway from the State company that controls Dublin and Cork airports has not worked.

A Shannon Group spokesman responded that the airport had grown passengers numbers by 23 per cent since separation.

“The airport generated passenger growth in six of the seven years since it was made independent,” he added.

1 Basic income for all: Has the Covid crisis given us a new economic model?
2 Chris Johns: Economies may enjoy ‘roaring twenties’ if ministers learn lessons
3 Wet pub openings fuelled rise in Irish Covid infection rates – report
4 There was no vaccine for Anglo: Why the last crisis was different
5 ‘I don’t need to do any of this. . .I don’t actually need to work.’
6 How long can Government afford to keep State pension age at 66?
7 Career opportunities? The ones that just may knock
8 Direct sea routes to Europe offer certainty in choppy Brexit waters
9 Only way is up for Stripe as valuation skyrockets
10 Profits jump threefold at LinkedIn’s Irish unit to $294.2m
Real news has value SUBSCRIBE