Emerald Airlines seeks licence from regulators in the Republic 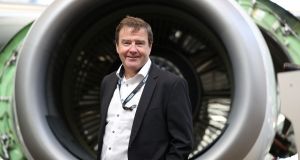 Emerald Airlines, a new carrier backed by aviation entrepreneur Conor McCarthy which is bidding for the Aer Lingus Regional contract, is seeking a licence from regulators in the Republic.

Aer Lingus put the contract to operate regional services in Britain and Ireland out for tender earlier this year. Bidders include its current partner Stobart Air, Emerald and others.

Aer Lingus is now weighing bids, and could decide later this month on whether to retain the services of Stobart Air or choose a new partner. The current deal ends in December 2022.

It is understood that Emerald has applied to the Republic’s Commission for Aviation Regulation (CAR) for an Air Carrier Operating Licence, which entitles the holder to sell flights to the public.

Applicants have to show they have the necessary finance and resources to operate a commercial airline in order to get a licence. Also, a majority of their owners, 51 per cent or more, must be based in the EU.

Mr McCarthy, the biggest shareholder in aircraft maintenance specialist Dublin Aerospace, set up Emerald Airlines in May. He did not comment on Thursday.

However, it is likely the business has other backers . Air Asia founder Tony Fernandes, aircraft manufacturer Airbus and State agency Enterprise Ireland all invested in Dublin Aerospace, which Mr McCarthy founded in 2009. It is not known if any of these are involved in the new project.

Stobart Air’s owner, UK-based transport, logistics and energy business Stobart Group, put the Irish carrier up for sale earlier this year. A loss of the Aer Lingus contract would be a blow to this as that is its main business.

This week Stobart Group said the airline and Propius, from which the carrier leases its aircraft, had burned £14.7 million sterling (€16.3m) since the group bought it back this year in a rescue bid.

It blamed the severe Covid-19 travel restrictions in the Republic, which grounded most of Stobart Air’s fleet and eliminated much of the demand for its services, for the losses.

“We are taking immediate action to seek an exit from Stobart Air and Propius before the end of the current financial year,” the group said. It added that this involved cutting costs.

Falko, owner of Irish-based Cityjet, which flies regional services for Scandinavian carrier SAS in northern Europe, was named as a possible bidder for Stobart Air.

Talks stalled once Aer Lingus confirmed it was putting the regional contract out to tender. At the same time there was speculation that Cityjet would bid for the Aer Lingus contract.

In the longer term Aer Lingus sees the regional services as key to its strategy of feeding passengers from Britain and Europe to its transatlantic flights at Dublin Airport.