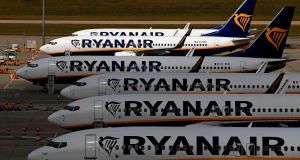 Knock Airport faces the suspension of Ryanair flights from this weekend until December 13th. Photograph: Adrian Dennis/AFP via Getty Images

The Republic’s airports plan to provide virus screening for departing passengers as part of an EU scheme to accelerate the return of air travel.

Cork Airport, part of State company DAA, plans to open a centre that will provide tests approved by the Health Products Regulatory Authority.

Rocdoc, the private company providing the service, said its prices would start at €149 per test.

Passengers will pay for the test and results will be available “within a few hours”, the company said.

EU countries will increasingly require incoming passengers to show they have tested negative for Covid-19 in order to avoid quarantines and other restrictions.

From this week, the Republic is waiving the need for passengers from regions ranked “orange” – or medium risk – under the EU’s traffic light system to self-isolate for 14 days, if they have tested negative up to three days before arrival.

Basil Sheerin, Kerry Airport’s chief financial officer, told the same committee that it was looking at getting a private company to offer pre-departure tests close to the airport, rather than on its premises.

He said that the Co Mayo airport had lost close to €4 million this year while it had “a reduction in turnover of €11 million”.

Knock faces the suspension of Ryanair flights from this weekend until December 13th, as a collapse in bookings in the face of ongoing travel restrictions prompted the airline to cut services from regional airports.

Mr Gilmore told politicians that Ryanair would restore services to London airports, Stansted and Luton, next month. Knock hope that this will boost traffic there.

Pandemic flight restrictions have cut passenger numbers in Donegal, Kerry and Knock airports by around 90 per cent.

Mr Gilmore called on the Government to open an air corridor with UK regions with low levels of Covid-19 infection to aid Knock and the other regional airports, which depend heavily on traffic with Britain.