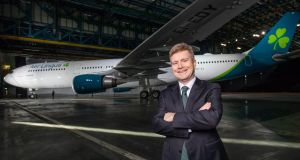 Seán Doyle takes over at BA as it is seeking to cut its workforce by 13,000 to combat the impact of Covid-19. Photograph: Naoise Culhane

Mr Doyle, from Youghal, Co Cork, took over as Aer Lingus chief executive at the beginning of last year following a two-decade career in British Airways, where he served in a series of senior posts.

IAG, owner of both carriers, announced on Monday that Mr Doyle was taking over as chief executive of British Airways “with immediate effect”.

The Irishman is succeeding Alex Cruz, who is stepping down from the chief executive’s job but will remain as British Airways chairman.

Donal Moriarty, Aer Lingus head of corporate affairs, will take over as interim chief executive of the Irish airline. IAG said a permanent appointment would be made in “due course”.

IAG chief executive Luis Gallego said: “We’re navigating the worst crisis faced in our industry and I’m confident these internal promotions will ensure IAG is well placed to emerge in a strong position.”

Mr Doyle takes over at BA as it is seeking to cut its workforce by 13,000 to combat the impact of Covid-19.

British trade unions and politicians have criticised the company’s approach to the cuts. Recent figures show passenger numbers at Heathrow Airport, the airline’s biggest hub, fell 82 per cent in September to 1.2 million.

Previously, he was head of strategy and planning, ran its cargo business, was responsible for its south and central American operations, and did stints in Singapore and Sydney. Among other things, Mr Doyle negotiated British Airways’ alliance with American Airlines.

He joined British Airways in 1998. During his career with the carrier, he saw it weather the crisis that struck aviation following the September 2001 terror attacks on New York, and witnessed first-hand the growth airlines have enjoyed in Asia this century.

Mr Doyle is following in the footsteps of fellow Irishman Willie Walsh, who led Aer Lingus before joining British Airways as chief executive.

He subsequently merged the UK carrier with Spain’s Iberia to form IAG, which went on to take over Vueling and Aer Lingus. Mr Walsh retired as IAG chief last month.

A graduate of University College Cork, Mr Doyle trained as a management accountant.

“Seán has expertly led Aer Lingus and has demonstrated exceptional leadership, composure and resilience during the unprecedented crisis that has been brought about by the Covid-19 pandemic,” Mr Gallego said.

Mr Moriarty has been working closely with Mr Doyle on navigating Aer Lingus through the Covid-19 crisis.

The airline is seeking to cut jobs. At the same time, it has been lobbying the Government to ease the Republic’s air travel restrictions, which are among the most severe in the EU.

Mr Moriarty is a qualified lawyer and joined the airline as a company secretary in 2009, before being appointed chief corporate affairs officer in November 2017.