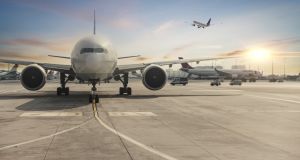 Airlines that fail to be at least 50 per cent owned by EU nationals risk losing their operating licences and relinquishing extensive flight privileges enjoyed in the single market. Photograph: iStock

Aer Lingus’s parent says flights will continue after Brexit despite ongoing questions about the impact of EU airline ownership rules on the Irish carrier.

The long-standing rules hold that EU nationals must own majority stakes in airlines that want to keep operating licences allowing them to operate freely in the bloc.

According to EU transport commissioner Adina Valean, Brussels intends maintaining these rules after January 1st, when the UK is finally destined to leave the bloc.

The EU’s commitment has implications for Irish carrier Aer Lingus, part of International Consolidated Airlines Group (IAG), most of whose shareholders could be classed as “non-EU” after January 1st.

Aer Lingus has an Irish air operator’s certificate, entitling it to fly, and establish bases, anywhere in the EU, but observers warn that its post-Brexit status is not yet clear.

IAG said this week that it expects the EU and UK to agree a comprehensive aviation agreement before Brexit. “Flights will continue to operate as normal,” the group said.

The Republic’s Commission for Aviation Regulation, which oversees airline ownership for Irish-licensed carriers, said all of them continue to comply with the rules. It does not comment on how individual operators manage this.

The watchdog has also said ownership rules were unlikely to change after Brexit, but noted most Irish carriers would be unaffected by this, even if there was no deal.

The commission added that it “continues to interact with all carriers in relation to their ongoing compliance with their licensing obligations”.

Ms Valean told the Financial Times this week that it was the job of national regulators to vet whether airlines still qualified for a licence, but the European Commission could investigate if other airlines or member states complained to Brussels that a company was breaking the rules.

“We are counting on the national authorities to carry out due diligence on this,” she said.

IAG also owns British Airways along with Spain’s Iberia and Vueling airlines. It is Spanish-registered and has its headquarters near Heathrow Airport in the UK, while its shares are traded in London and Madrid.

Middle Eastern country Qatar owns 25.1 per cent of the group, and various institutional investors, some based in the UK, hold stakes in the business.

Its mix of shareholders and the fact that it controls airlines that will be based in and outside the EU post-Brexit have drawn particular attention to its strategy for managing ownership since the UK voted to leave the bloc in 2016.

Ms Valean warned that airlines that fail to be at least 50 per cent owned by EU nationals risk losing their operating licences and relinquishing extensive flight privileges enjoyed in the single market.

She called on airlines to draw up “honest” plans that prove compliance with the rules. “If an airline believes some other airlines are not complying with this obligation, then they can complain to the commission,” she said. “We are going to look very carefully and would like to see compliance, not only nominally but effectively too.”

IAG placed a cap on the number of non-EU investors who could own its shares for most of 2019, after its non-EU share ownership reached 47.5 per cent – approaching the 50 per cent threshold.

The group lifted the restrictions in January this year, when it said non-EU ownership had fallen to 39.5 per cent – a figure that did not consider UK nationals as being outside the EU.

IAG has said it has agreed contingency plans with national regulators here and in Spain.