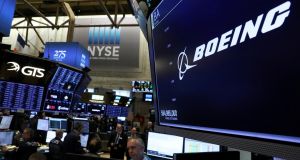 Boeing shares fell another 7 per cent on Tuesday after having lost 5 per cent on Monday. REUTERS/Brendan McDermid/File Photo

Boeing’s two-day rout topped 11 per cent as Europe’s aviation authority banned its troubled aircraft, the 737 MAX. The European Union’s aviation safety regulator on Tuesday suspended all flights in the bloc by Boeing 737 MAX planes in the biggest setback yet for the US planemaker following a crash in Ethiopia that killed 157 people. The move came after Britain, Germany and France joined a wave of suspensions of the aircraft in the wake of Sunday’s crash, and was swiftly followed by a similar decision by India, piling pressure on the United States to follow suit.

Boeing, the world’s biggest planemaker, which has seen billions of dollars wiped off its market value, said it understood the countries’ actions but retained “full confidence” in the 737 MAX and had safety as its priority. It also said the US Federal Aviation Authority (FAA) had not demanded any further action related to 737 MAX operations. The cause of Sunday’s crash, which followed another disaster with a 737 MAX five months ago in Indonesia that killed 189 people, remains unknown. There is no evidence yet whether the two crashes are linked.

Investigators are examining the role of a software system designed to push the plane down, alongside airline training and repair standards.

Boeing says it plans to update the software in coming weeks. US president Donald Trump spoke to Boeing chief executive Dennis Muilenburg on Tuesday, a source familiar with the matter said. US Senators Mitt Romney and Elizabeth Warren called on the FAA to temporarily ground the 737 MAX.

The new variant of the 737, the world’s most-sold modern passenger aircraft, is viewed as the likely workhorse for global airlines for decades, and another 4,661 are on order. Over 40 per cent of the MAX fleet has been grounded, Flightglobal said, though many airlines still use older jets.

Boeing shares fell another 7 per cent on Tuesday after having lost 5 per cent on Monday. Former FAA accident investigator Mike Daniel said the decision by regulators to ground the planes was premature. “To me it’s almost surreal how quickly some of the regulators are just grounding the aircraft without any factual information yet as a result of the investigation,” he said.