When attempting to drive to Europe's northernmost point, one probably does not consider the two-seat, convertible, rear-wheel drive Mazda MX5 to be the ideal car. Neil Briscoe puts the little Japanese sports car to the ultimate test. 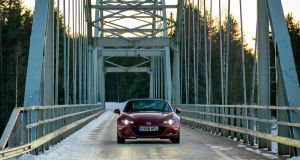 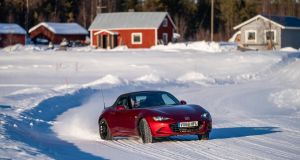 The MX-5 was designed for sunny days, trips to the coast, and warm evening sprints up snaking mountain roads. 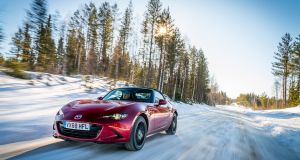 We persisted with keeping the roof down. Keep the heated seats on and the heater turned up full, and the MX-5’s open cabin stayed warm. Keep above 50km/h and the falling snow just gets blown over your head 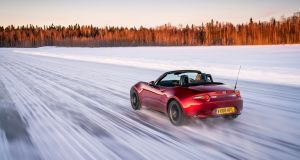 Bit by bit, you start to drive a little like a local. Slide, catch, slide, catch, all to the tune of that willing 2.0-litre barking with joy as you blip the throttle on downshifts

“Are you crazy?” The question wasn’t posed with incredulity nor hostility, but seemingly with genuine curiosity. I guess your average petrol station in Finnish Lapland doesn’t see a lot of convertible sports cars passing through. Even fewer in the frigid, wintry month of March. Fewer yet with the roofs actually folded back and the cockpit actually opened to the elements.

“No, we’re not crazy,” I cheerfully explained to the curious Finn manning the pumps. “We’re journalists.” It probably amounts to the same thing.

Top down in -20 degrees is probably not the life that many people envisage when they buy a sports car. Certainly, it’s a long way from the baking heat of California, where the original Mazda MX-5 was developed. Still, 30 years and more than 1,000,000 sales on, here we are – tracking across the frozen Arctic in a small, two-seat sports car. With the roof down.

Mazda had set us the challenge of driving from Lulea, in northern Sweden (on the Gulf of Bothnia, where the local industries are steel-making and Facebook servers) to the North Cape. Right at the northernmost tip of Norway, the North Cape is the most northerly part of Europe that’s accessible by car. To get farther than this, you need wings or a watertight hull.

In the summer the Cape, and the nearby town of Honningsvag, swarm with tourists arriving on buses, by light aircraft, or by cruise ship. In March, amid the howling gales and white-out snow, it’s a little sleepier, and a little more hard to access. Yes, there is a road all the way, but it passes through several tunnels cut through mountains and dug under the sea, and those are prone to being closed by bad weather. The little MX-5 was going to have to work for its living.

It was not, however, going to be modified. In fact, it was actually pretty basic. The MX-5 has been given a minor update for 2019, including a more powerful 2.0-litre engine which now has 184hp, and which comes as standard with a limited-slip differential between the rear wheels. That could be useful on this trip – it prevents an unloaded rear wheel from spinning uselessly, wasting the engine’s power and digging you deeper into a waiting snow drift.

What it lacks is a diff between the front wheels. The MX-5 has always been, and will only ever be, rear-wheel drive. First launched 30 years ago this year, in 1989, and drawing inspiration from the Lotus Elan of the 1960s, the MX-5 was designed for sunny days, trips to the coast, and warm evening sprints up snaking mountain roads.

It does not have four-wheel drive, and in spite of the specialist winter tyres (complete with steel studs for grip on ice, and mounted on gorgeous – optional – BBS alloy wheels) the MX-5 was clearly going to struggle if the going got tough.

Oh, and we had sworn to do the entire drive with the roof down. Well, otherwise what would be the point of going at all? Where’s the intrepidity in doing a journey such as this with a roof over one’s head? The whole point was the experience the frigid savagery of the Arctic.

The bright blue Swedish skies as we set off made that rather easier. It was cold – properly cold, with the temperature gauge reading -21 degrees as we left, but the combination of hats, gloves, thick jackets, and the MX-5’s toasty heated seats meant that we actually felt fine bowling along with a thousand miles of headroom above us.

Trepidation that the rear-wheel drive MX-5 might struggle with the snow and ice was also pointless. The conditions were such that, transposed to home, the Garda would be on the radio imploring you to consider the necessity of your journey, and airports and railways would be echoing to snowy silence. In Sweden it was just Tuesday, and the locals were going to work and school, throwing the occasional disbelieving glance at the open Mazda cruising through the snow.

All those BMW and Mercedes drivers who throw up their hands in horrified defeat the moment a flake of snow lands can take some lessons from this. The lesson being tyres. Those studs, and that winter-friendly rubber compound meant that there was barely an issue to be found. The MX-5’s stability and traction control systems also helped – giving you enough of a leeway to feel like rally stage hero when you fancied, but reigning things in before things passed through fun and on to emergency.

A session on a frozen-solid harbour, with those systems turned off, showed just how important the electronic interventions were. Aside from a little slip and slide pulling away from snowy junctions, the MX-5 was rock-solid steady.

Practical, too. The new steering column, which for the first time in the little Mazda’s three decades adjusts for reach as well as height, has transformed the MX-5’s driving position to the point where even six-and-a-bit-foot of me can get comfy for a long drive. All 860km of it. There’s also enough space in the boot for two decent-sized squashy bags – sufficient for two for a weekend away, or one for a week possibly.

A week behind the wheel, for the first several hundred kilometres, seemed like a dream assignment. For the last leg of the journey, having left behind our disbelieving petrol pump attendant, it seemed like it might become necessary. The blue skies of Sweden and Finland behind us, we crossed into Norway and began tracking up the edges of the northern fjords with towering black snow clouds beginning to stack into the sky ahead.

North of Alta, with its shimmering, half-frozen fjord and the dramatic, azure streak of frozen waterfall dangling over the road like a special effect from The Lord Of The Rings, the weather closed in. The snow was coming in showers, with tantalising glimpses of clear sky above, but with white-out at ground level.

Visibility kept reducing, and even when the snow was not falling, more fine powder was being whipped into the air by the wind and by the outwash from passing cars and marauding snow ploughs. As we ascended the towering crags and slid back down to sea level at the bottom of the fjords, sometimes we were reduced to following the lines of fluorescent poles that marked the verges of the road. At others, it was a case of peering into the snowy cloud ahead and hoping to spot the tail-lights of the car in front.

Nevertheless, we persisted with keeping the roof down. Keep the heated seats on and the heater turned up full, and the MX-5’s open cabin stayed warm. Keep above 50km/h and the falling snow just gets blown over your head. Keep above 50km/h and you can also exploit that fabulous steering, those brilliant rear-drive dynamics and, bit by bit, you start to drive a little like a local. Slide, catch, slide, catch, all to the tune of that willing 2.0-litre barking with joy as you blip the throttle on downshifts.

Was there a point to any of this? Well, it was an opportunity to try out the revised MX-5, which proves once again the pointlessness of spending more on any car if fun is highest amid your priorities. It proved too that those thinking they’re dead rugged by buying a tall SUV are actually wasting money that would be better spent on more capable tyres. Proof too that Japanese engineering is superior – the likes of the 1960s MGB and Lotus Elan, from which the MX-5 drew its original inspiration, would have struggled at best to complete a trip such as this, in conditions such as this.

With darkness gathering and with faint twinklings of the Aurora Borealis in the clearing sky, we made it to the windswept peak of Europe. The North Cape is a bleak, lonely spot (well, it would be if it weren’t for the warm and welcoming visitors’ centre . . .) and as you peer down the 300-metre cliff to the Arctic Ocean below, there is no solid land mass between you and the North Pole. In fact, at 71 degrees north, you’re closer to that pole than you are to Dublin.

It’s the kind of place you’d expect to need a vast 4x4 to reach, one of those modified Icelandic vehicles with monster-truck tyres and winches attached to every exterior surface. But we had come here in a small sports car. A rear-wheel drive sports car. With the roof down for every kilometre we travelled. Were we crazy? Perhaps but boy were we having crazy fun.