Self-driving cars: Is the autonomous dream slipping away from us? 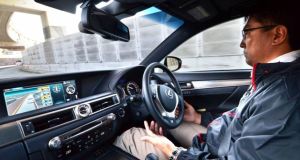 The coming of the robot car has been screamed loud from every headline and tech blog for the past decade, but increasingly car makers are being more cautious about handing over control to the microchips.

Carlos Tavares, the head of PSA Group and its multitude of car-making brands – Peugeot, Citroen, DS, Opel, and Vauxhall – has said that fully autonomous cars may never make a mass-market breakthrough, because the technology will be too expensive for retail buyers.

Tavares made his comments last month during a press conference where PSA revealed record car-making financial results, which included the first profit for more than two decades for Opel and Vauxhall.

Fully autonomous tech, which would allow cars to entirely drive themselves, will remain the preserve of “those who could anyway afford to employ a driver” said Tavares.

He said that PSA would continue to work on advanced driver aids, up to Level 3 (where the car can steer and brake itself on some roads but requires the driver to still pay attention and take control of the vehicle at regular intervals).

Tavares’ sentiments seem to echo those of Ford, which apparently took a step back from committing to full vehicle autonomy.

According to Automotive News, Ford – having recently been a firm advocate of vehicle autonomy, and having gone so far as to build a Hollywood-style fake town on a Michigan test track to aid in the development of robot cars – seems to be rolling back on its original commitments.

Ford had championed the idea of leaping over Level 3 autonomy – where the car is mostly in control but which still requires human control and intervention – and going straight to Level 4, where the computer systems are broadly in control all of the time.

Now though, Ford has changed its corporate and technological mind, and it reckons that systems which ensure that the driver is actually paying attention and keeping an eye on things will be just as critical as those that actually control the car.

“Taking steps to get there as opposed to a big bang is more practical,” said Marcy Klevorn, Ford’s president of mobility.

“I think it allows us to provide autonomy in step functions to get people used to it. Acceptance is going to be a big deal; this is totally a different way to move. If you go right to full autonomy, the acceptance curve will be very steep, and you won’t have as much to learn about how humans interact with autonomy. If you just take that leap, you miss out on all those learnings.”

Ford still says that it plans to have Level 4 vehicles in use by 2021, but that in the meantime it will focus on “semi-autonomous systems”.

It’s a view that, increasingly, seems to chime with those of other major car makers.

Autonomy is still making headlines (not always necessarily for the right reasons) but in the background, the motor industry seems to be laying plans to keep human drivers at the wheel for some time to come.

In spite of the prediction of uncountable billions in revenue from autonomous driving services in the future, and the all-too countable billions currently being invested in such technology (it’s one major reason why General Motors is currently laying-off thousands of its employees so that it can invest in such futuristic systems) there are doubts appearing in the robot driving edifice.

The American tech giant had been working on a much-publicised-and-or-rumoured autonomous car project codenamed, Titan.

It had been touted as a major disrupter into the automotive world, one that could seriously upset the apple-carts of existing major car makers.

Titan, though, seems to have proved rather more Titanic, and is sinking fast. Apple has confirmed that, far from pressing ahead, it’s planning to lay-off 190 people associated with the project, including product design engineers, and a machine shop supervisor.

While Apple hasn’t entirely abandoned the idea, it looks now more likely that it will “do an IBM” and instead of designing a car, will create plug-and-play autonomous and automated driving tech systems to be used by existing car companies.

Mark Teevan is the strategy, innovation and corporate affairs director at Toyota Ireland and he told The Irish Times: “On the Toyota side, in terms of autonomous cars, we’re working very hard on two drive modes called chauffeur and guardian.

“So they’re not really in direct line with the Level 4, Level 5 levels of autonomy that we’re used to, and they’re not full automation – in fact, within Toyota we refer to automated driving rather than autonomous. We see the consumer as remaining in the centre of the process.”

Toyota is far from alone in that regard. Waymo, which is Google’s robotic car division, has officially launched its Waymo One robot taxi service. The first users, in the city of Chandler, Arizona, can now begin hailing their autonomous cars (based on Chrysler Pacifica MPVs) to come and pick them up and swoosh them, futuristically, to their destinations.

John Krafcik, Waymo’s chief executive, launched the service by saying that Waymo and Google have spent the past decade designing the “most experienced driver, ever. Self-driving technology is new to many, so we’re proceeding carefully with the comfort and convenience of our riders in mind” said Krafcik.

That careful approach means that, at first, your robot taxi isn’t actually robotic at all. In fact, it’s rather closer to currently available on-sale automated (as opposed to autonomous) driving tech than Google might care to admit.

The fact that, for now, a Waymo employee will be sat in the driving seat, ready and able to take control of the car if needed, suggests that there’s not yet full confidence in the technology.

‘This death or that death’

BMW’s special representative to the UK government, Ian Robertson, recently gave a speech to the Society of Motor Manufacturers and Traders (SMMT, the UK’s equivalent of Ireland’s Society of the Irish Motor Industry) in which he has questioned the very notion of fully autonomous driving. And it’s not the tech, that’s in question, it’s the morals.

“Imagine a scenario where the car has to decide between hitting one person or the other – to choose whether to cause this death or that death,” Robertson said in his address.

“What’s it going to do? Access the diary of one and ascertain they are terminally ill and so should be hit? I don’t think that situation will ever be allowed.”

BMW has previously stated that it intends to have cars capable of hands-off driving available by 2021, and has even shown off a Rolls-Royce concept car that dispensed with a steering wheel and other driver controls entirely.

The Munich firm has spoken of its 2021 model being a Level 3.5 autonomous capable car.

That would theoretically mean that it’s capable of driving without any driver input, but still needs a human operator to cover some more unusual scenarios. That is the very gap, the one between Level 3 and Level 4 autonomy, that many commentators have described as the most dangerous stage of autonomous vehicle development – the one where the machines are almost, but not quite, fully capable of taking over.

Robertson seems to doubt that the driver can ever be fully dispensed with.

“If we are working towards a ‘brain off’ scenario, where perhaps we expect travellers to even sit in the back of the car and relax, then that clearly isn’t possible today, despite what some might tell you.

Then there is the overarching consideration of the regulators that we need to consider.

They know we are in a race to take leadership and that opening up to testing could have significant benefits,” Robertson said.

“But I believe that in the long term, the regulators will step in and set boundaries about how far we can go. It might be to allow it only on motorways, as they are the most controlled environments.”

Other car makers have expressed doubts along similar lines.

Mazda recently said that its research showed that an average of 69 per cent of drivers “hope that future generations will continue to have the option to drive cars”.

The figure is as high as 74 per cent in Poland and 70 per cent or higher in the UK, Germany, France and Sweden.

In addition, 36 per cent of those who enjoy driving see their car and the act of driving as an “extension of my personality” with the number rising to 56 per cent in Poland and 46 per cent in Italy.

And 34 per cent agree driving is in danger of becoming a “forgotten pleasure” – in France, Italy and Poland the figure is 40 per cent or higher.

Mazda Motor Europe’s president and chief executive Jeff Guyton said that “as a brand we simply love driving and this research demonstrates very clearly that a huge number of European drivers agree with us – of course, there is a role for self-driving cars but for us, and for many others it seems, there really is nothing quite like the physical pleasure of driving.

“This is why at Mazda we believe in putting the driver at the heart of everything we do and it’s why our current Drive Together campaign focuses on the bond between car and driver.

“We call this jinba ittai which is the Japanese phrase used to describe the perfect harmony between the mounted archer and his horse. It is this human-centric philosophy that underpins our business and helps us create cars that bring the driver and their car closer together.”

Meanwhile, Nissan has suggested that robotic cars might need a human-based mission control style system to help them deal with unexpected situations, while Porsche – with its customer base of ever-enthusiastic drivers – has sworn to be “the last car maker to include a steering wheel as standard equipment”.

Miscarriages and IVF: chasing a rainbow baby (and when to stop)
6