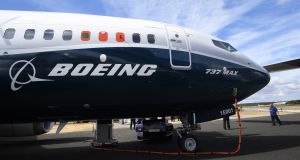 Boeing on Wednesday said the costs associated with the grounding of the 737 Max were likely to surpass $18 billion (€16.36 billion), a significant increase over earlier forecasts as the company posted its first annual loss since 1997.

The new estimate, announced during Boeing’s quarterly earnings report, is the company’s most recent approximation of just how expensive it will be to return the Max to service, compensate airline customers and restart the shuttered 737 factory.

It comes as the aircraft manufacturer said on Wednesday that it lost $1 billion in the fourth quarter as revenue plunged 37 per cent due to the grounding of the Max. The company took a pre-tax charge of $2.6 billion to cover more concessions to airlines that have cancelled thousands of flights without their Max jets.

Boeing continues to grapple with the fallout from the crashes of two Max jets in 2018 and 2019, which killed 346 people, leading to the worldwide grounding of the aircraft in March.

In addition to the rising costs, the company is contending with a new chief executive, the temporary shutdown of the 737 factory and a range of challenges in other parts of the business.

Boeing said that the costs associated with shutting down and restarting the factory would amount to some $4 billion. The decision to temporarily halt production of the Max was only made last month, and Boeing had not previously given guidance on what the move would cost.

The company also said that the cost of compensating airlines that have suffered lost sales as a result of the grounding of the Max was now expected to reach $8.3 billion, up from a previous estimate of $5.6 billion.

That figure represents a mixture of cash payments to airlines, as well as discounts on future sales.

And Boeing said that as a result of the grounding, which has lasted nearly a year now, it expected the overall cost to produce the 737 Max to rise to $6.3 billion in the years ahead, up from an earlier estimate of $3.6 billion. In total, the anticipated costs now equal more than $18.6 billion, or nearly 20 per cent of Boeing’s annual sales before the Max was grounded.

This was the company’s first quarterly earnings report with David Calhoun at the helm, he succeeded the previous chief executive, Dennis Muilenburg.

There is still no precise timeline for the return of the Max. Last week, Boeing said it did not expect regulators to approve the plane to fly until June or July, though that estimate was conservative.

If regulators do not find any additional problems with the Max, it could return to service before then. – New York Times service/Associated Press

1 How well paid do you think you are? Here’s how to work it out
2 Life as a Facebook moderator: ‘People are awful. This is what my job has taught me’
3 AIB to sell more than 500 ATMs to Brink’s
4 Wealthy investors’ legal challenge against Revenue fails
5 New 24-storey tower for Cork city approved despite council concerns
6 Former top Department of Finance official David Doyle dies aged 70
7 Flight attendent seeks High Court injunction against Aer Lingus
8 Dublin down nearly 4% as coronavirus hits markets
9 Citi names Limerick native Cecilia Ronan European unit chief
10 Coronavirus and the etiquette of working from home
Real news has value SUBSCRIBE