Production of 737 Max could resume ahead of schedule, says Boeing boss 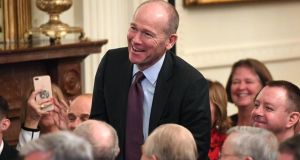 Boeing CEO Dave Calhoun said the company is not considering scrapping the 737 Max and expects it will continue to fly for a generation. Photograph: Saul Loeb/AFP via Getty Images

Boeing chief executive Dave Calhoun told reporters on Wednesday the US planemaker expects to resume 737 Max production months before its forecasted mid-year return to service and said it did not plan to suspend or cut its dividend.

The company announced a production halt in December, when the global grounding of the fast-selling 737 Max following two deadly crashes in five months looked set to last into mid-2020.

Ryanair has up to 210 of the craft on order but none in service.

Mr Calhoun said the company is not considering scrapping the Max and expects it will continue to fly for a generation. He also said it will not launch a marketing campaign to get customers to get back on 737 Max planes.

He also disclosed Boeing is starting with a “clean sheet of paper” on a new midsize plane, but it is not clear if the company is scrapping the existing design.

The company said on Tuesday it now expects regulators to approve the plane’s return to service in the middle of the year. Mr Calhoun said he did not see recent issues raised about wiring or software as “serious problems”.

Boeing shares were down 2 per cent on Wednesday.