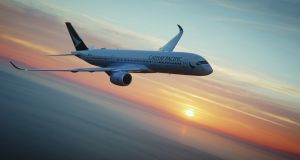 Cathay will begin a “flash sale” offering cut-price fares from the Republic’s capital to various Asian and Australian destinations from Friday.

Cathay Pacific will resume Dublin-Hong Kong flights at the end of March, the airline confirmed on Thursday.

Cathay shelved the service in November after fierce pro-democracy protests sent the number of people travelling to the island tumbling by 40 per cent in August.

The airline said on Thursday that the four-times a-week service from Dublin to Hong Kong would resume on March 28th.

In a bid to boost interest in the service, Cathay will begin a “flash sale” offering cut-price fares from the Republic’s capital to various Asian and Australian destinations from Friday.

Launched in June 2018, Cathay’s was the first direct service from the Republic to any part of China.

A year later, in June 2019, the company reported “encouraging” seat sales for its first 12 months.

Many Irish people using the service flew on to other destinations on Cathay’s network in the far east, the airline said. The 2019 Rugby World Cup in Japan increased demand last year.

The flights helped lure Chinese travellers to this country. Tourism Ireland hopes to double the number of tourists from China to 200,000 by 2025.

1 IMF chief says pandemic will unleash worst recession since Great Depression
2 Irish Times cuts senior manager and editor pay by up to 30%
3 Ireland’s financial reputation: why this time it is different
4 Lockdown exit: How can Irish economy reopen without big health risks?
5 Debenhams to shut stores in Republic with loss of 1,000 jobs
6 Dutch go out on limb in fractious negotiations on aid for fellow EU states
7 Coronavirus: The online scams, apps and trends you need to know about during the pandemic
8 TCD to spend €200,000 on Chinese student recruitment drive
9 Former CIÉ executive chairman Dr John Lynch dies
10 DAA to cut workers’ pay by 20% as Covid-19 travel bans continue
Real news has value SUBSCRIBE