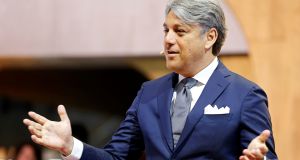 Renault has named Luca de Meo as its chief executive as the French carmaker looks to stabilise the company.

Renault has named Luca de Meo as its chief executive as the French carmaker looks to stabilise the company following the chaos that engulfed the group after the ousting of former boss Carlos Ghosn more than a year ago.

The Italian, a former Volkswagen and Fiat executive, will join the company in July, at a critical time for the business, which is trying to stem falling sales and repair a fractured relationship with Japanese alliance partner Nissan.

The alliance, which includes Mitsubishi, is collectively the second-largest carmaker in the world, but performance at the three companies has slipped amid infighting and a wave of distrust following Mr Ghosn’s arrest in November 2018.

Negotiations between VW and Renault have been going on for several months, with Mr de Meo stepping down from his post as chief executive of the Seat brand, which is part of VW Group, this month.

Mr de Meo oversaw a turnaround at Seat from the poor relation in VW’s stable of brands to a profit centre and one of its fastest-growing marques, with earnings in 2018 rising a quarter to €286 million.

He speaks five languages – Italian, English, French, German and Spanish – and was regarded as a potential successor to VW Group chief executive Herbert Diess, but was passed over several times for senior posts within the company, including at his former brand Audi.

Running an overtly Spanish brand at a German carmaker, Mr de Meo will have some experience of the cultural dexterity required to operate in an environment with seemingly-competing nationalities, something likely to be required in his new role.

Relations between Renault, which is part-owned by the French state, and Nissan have fallen to a low over the past year. Renault chairman Jean-Dominique Senard told the Financial Times last year there were times he believed the partnership would crumble.

Renault said it “considered that Mr de Meo, through his career, his experience and his success in his previous functions, combines all the qualities to contribute to all aspects of Groupe Renault’s development and transformation”.

Mr Senard said Mr de Meo “is a great strategist and visionary of a rapidly changing automotive world” and said the appointment “marks a decisive step for the group and for the alliance”.

Mr Senard is seeking to draw a line under the months of turmoil within the French carmaker, in finding a replacement for Thierry Bolloré, a former lieutenant to Mr Ghosn who was fired by the carmaker’s board last year.

Mr de Meo has had a long career, rising through marketing and sales, bringing slick presentation and personal skills to his jobs.

However, there are questions over whether he will bring industrial or engineering discipline to the French carmaker that has long prided itself on its urban brand image rather than its technical prowess. – Copyright The Financial Times Limited 2020