Portuguese cabin crew due to strike from Wednesday 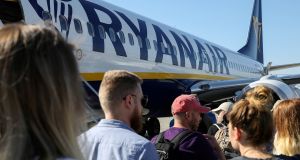 Unions in Ireland, Britain, Spain and Portugal have announced plans to strike in the coming weeks. Photograph: Reuters

Belgium’s CNE and ACV PULS trade unions have told members not to comply with a Ryanair request to staff flights affected by a planned strike by Portuguese crew from Wednesday, a letter sent to the airline shows.

Unions in Ireland, Britain, Spain and Portugal have announced plans to strike in the coming weeks, a year after a wave of strikes over pay and conditions forced Europe’s largest budget carrier to cancel hundreds of flights.

Ryanair has said it expects minimal disruption from the walkouts which are scheduled to begin with a five-day strike by Portuguese cabin crew trade union SNPVAC.

It said on Tuesday that a small number of flights from its Portuguese bases may be affected by minor schedule changes for five days from August 21st, and that all affected customers had already been notified.

Irish-based pilots have voted to strike over two days later this week on Thursday, August 22nd. and Friday, August 23rd.

In the letter to Ryanair the two Belgian unions said cabin crew and pilots stationed in Belgium had been asked to staff some affected flights.

“Unfortunately we had to conclude that Ryanair decided to import the conflict that is going on in Portugal to Belgium....We cannot agree with this state of affairs, and will, therefore, call on our members not to staff these flights.”

A spokesman for Portugal’s SNPVAC union said it had received information that flights would be operated by crews from other bases, and that this was a “violation of the right to strike”.

Ryanair did not respond to a request for immediate comment on the staffing of flights. – Reuters