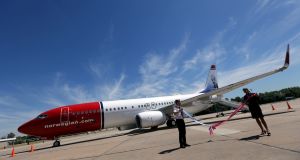 Norwegian Finans Holding owns Bank Norwegian, a credit card company originally set up by Norwegian Air. The airline is selling its 17.5 per cent stake to Cidron Xingu Limited, indirectly controlled by Nordic Capital Fund IX and Sampo. The deal will boost Norwegian Air’s cash holdings by 934 million crowns and lead to an accounting gain of 196 million.

The European aviation sector has been struggling with overcapacity, leading some airlines to offer loss-making fares and a few smaller carriers to go bust. “The sale of the NOFI shares is part of Norwegian’s strategy to strengthen our core airline operations and focus on the transition from growth to profitability,” Norwegian Air’s acting chief executive Geir Karlsen said in a statement. While the deal could help the airline refinance a €250 million bond maturing in December, some analysts said the company may need to raise more cash from shareholders at a later time.

Norwegian late last year set out plans to slash costs and focus on short-term profitability over long-term growth, but has been hampered by the worldwide grounding of the Boeing 737 MAX aircraft, of which the company has 18 in its fleet.

As part of the retrenchment, the airline has decided to pull its transatlantic flights from Ireland.

While the airline’s earnings per passenger rose during the important early summer months, the increase was smaller than most analysts had anticipated, hitting the company’s share price. “Without an ongoing sustained improvement in the unit revenue position or unit cost position of the business, we struggle to see how the company can get through the next nine months without needing to return to capital markets for additional equity,” Bernstein analysts said in a research note. - Reuters