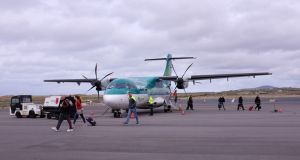 Passenger growth on State-subsidised flights from Dublin to both Kerry and Donegal could allow the Government to cut the funding it gives the airline operating those routes, a review has found.

A study of the regional airports programme produced by the Department of Transport shows that the public service obligation (PSO) routes have seen significant passenger growth in recent years with subsidies per passenger decreasing “substantially” since 2012.

While Donegal was the most expensive of the operational regional airports in the State in 2018, when Waterford Airport last had flights it cost taxpayers considerably more per passenger.

In 2016, before airline VLM withdrew leaving Waterford without any commercial flights, the State paid out €75 per passenger.

The review notes that about 380,000 people live within an hour of Waterford Airport, although the catchment area overlaps with Cork and Dublin airports. “While the absence of the airport would mean that residents of Waterford city and the southeast are around two hours from the nearest airports, this must be balanced against the lack of services currently being provided,” the review said.

In June, the department said it would give €5 million in exchequer funding to Waterford Airport, despite the facility not having any commercial flights for three years. The airport is planning a €12 million runway extension to cater to larger aircraft, with funding also being provided by the private sector.

The spending review released on Thursday suggests that the lengthening of the runway could attract airlines that land larger aircraft but acknowledges that the “current lack of services may also imply a lack of demand”.

The spending review of the regional airports programme comes in the last year of a four-year PSO programme, which is designed to ensure that air connectivity can be provided to the Republic’s more isolated regions.

Of the four airports covered by the initiative, the review finds that Knock “offers the most potential in becoming a self-sustaining commercial operation in terms of passenger numbers”.

“However, like all other airports in the regional airport programme, it is still below the annual one million passenger figure regarded by the EU guidelines as the threshold for an airport to begin to achieve long-term commercial viability.”

On Kerry Airport, the review noted that tourism is an important factor in the use of the airport. It says it is worth examining the extent to which tourist trips are additional as a result of the airport, “given the region’s proximity to both Cork and Shannon airports”.

The review also refers to a 2010 report published by the department that examined whether the airports offered value for money. That report argued that the PSO service from Dublin to Kerry should be ended while only the service to Donegal should remain.

“Donegal Airport provides connectivity to Ireland’s most isolated region, which is located more than four hours from Dublin,” the review says. It also notes however that the population it serves is small – fewer than 10,000 people live within half an hour of the airport.

1 Coronavirus: We must save lives but we also need to live
2 Avoca warns of redundancies due to coronavirus
3 Grounded Aer Lingus pilots develop fix for turnaround glitches
4 Virgin Media vows to withhold sports channels until Eir ‘pays its bill’
5 Taxi app Free Now blames ‘technical issues’ for driver payment delays
6 Anti-money laundering rules to be made law after State fined €2m for delays
7 Moving in and out of lockdown is a recipe for economic disaster
8 BT and Arnotts unlikely to be last retail victims of Covid-19
9 Non-executive directors face new paradigm in the boardroom
10 Ulster Bank tells customers in error they cannot extend payment breaks
Real news has value SUBSCRIBE