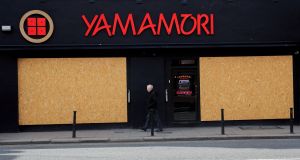 As ministers prepare to announce fresh anti-virus restrictions for the hospitality sector, representatives of the industry say they will accept a longer and deeper shutdown to keep infection rates dampened if the Government significantly beefs up taxpayer compensation paid to operators.

Restaurateurs and publicans are bracing this week for an expected further shutdown of the hospitality sector, which public health officials blame in part for causing a recent spike in infection rates, although they have yet to produce statistical evidence to illustrate how hospitality affects the spread.

The hospitality industry expects a prolonged ban on indoor dining at bars and restaurants to be announced on Tuesday, the potential for which has already been signalled by ministers.

Estimates within the sector range from an initial three-week shutdown followed by a review, to a possible six-week shutdown, to growing fears among some operators that they might be effectively shut until after St Patrick’s Day with a 12-week closure order.

The Licensed Vintners Association (LVA), which represents more than 700 pubs in the capital, including more than 200 so-called “wet pubs” ordered closed since before St Patrick’s Day of this year, said the current strategy for fighting the virus has “failed”. When it was pointed out to its chief executive Donall O’Keeffe that any alternative strategies would likely involve prolonged shutdown, he said this could be “tolerated” if the Government doubled payments under the Covid Restrictions Support Scheme (CRSS).

CRSS allows operators to claim up to 10 per cent of average weekly turnover in State compensation during forced closures, but many businesses say it does not allow them meet their fixed costs.

“It has been suggested to us that there is potentially a six-week closure coming. The real issue in the hospitality sector is under what circumstances will we be allowed reopen?” said Mr O’Keeffe.

“Will it not be until after the vaccine has kicked in? That’s the fear. CRSS is welcome but not enough on its own. If they doubled it, businesses might be able to tolerate longer closure.”

Adrian Cummins, chief executive of the Restaurants Association of Ireland, said he had heard suggestions from within Government that a three-week closure is on the cards initially, but there are fears it could be extended. He called on the Government to announce a fresh compensation package for the sector, in exchange for potential agreement to shut down for longer to beat the virus.

“The compensation would need to be at the right level to keep operators afloat. We would need to sit down and agree to it,” he said, suggesting that CRSS would have to be “a multiple” of its current level to help his members cover the cost of a forced closure.

Eoghan O’Mara Walsh, chief executive of the Irish Tourism Industry Confederation umbrella group, said it would also be seeking further compensation for the sector if there is another closure for “any significant length”, while he criticised the fact that CRSS was not available to some businesses.

“If an adequate compensation package is available, the industry would be prepared to take a longer period of enforced shutdown.”

The industry expects a fresh closure order beginning December 28th, although in practice, this would mean many outlets closing on Christmas Eve and not reopening.

6 Moving to a right-sized home: What are your options?