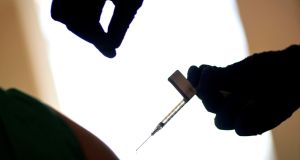 The mutation on the spike protein of the coronavirus could impede vaccines from working. Photograph: AP Photo/David Goldman

The mutant variant of Covid-19 that has surfaced in the UK is likely to be shown to be circulating in the Republic in coming days, according to Irish virology experts – already there are four suspect cases in Northern Ireland.

Critical data is likely to emerge over the next week that will confirm if the new variant of Covid-19 is much more transmissible than other forms of the virus and represents an increased threat to vulnerable groups, especially older people.

More than 4,000 Sars-Cov-2 mutations had been observed by genetic profiling, of which maybe a handful appear to be of any significance. The variant discovered in southeast Britain is, however, displaying characteristics that may mean it falls into the most troublesome category.

Preliminary indications are that the new variant discovered in southeast Britain could be up to 70 per cent more transmissible and could increase the reproductive number (R value) by 0.4 or more, the European Centre for Disease Prevention and Control said on Monday. Indications so far are that it does not appear to raise risk of severe illness or the mortality rate.

The UK government’s New and Emerging Respiratory Virus Threats Advisory Group on Sunday expressed “moderate confidence” the variant demonstrated a substantial increase in transmissibility. They cautioned the data was preliminary and largely based on modelling, ie predicting likely scenarios.

Much of that critical data is likely to emerge by laboratory-based confirmation in coming days, said immunologist Prof Paul Moynagh of Maynooth University.

As the variant had already reached Australia, “there is a pretty good chance that it has probably arrived here [in Ireland],” he added. The National Virus Reference Laboratory in UCD is sequencing strains but this variant has not shown up yet.

Of most concern are changes in the variant’s spike protein – the part of the virus that allows it to infiltrate cells in the lungs, throat and nasal cavity by interacting with a receptor called ACE-2, Prof Moynagh confirmed.

The mutation on the spike protein may enhance the virus’s ability to interact with ACE-2, giving it “a biological advantage” over other strains, he said.

The spike protein is the bit of the virus that vaccines are designed to develop antibodies against, so this mutation could impede the vaccine from doing its job. That question needs to be answered through laboratory studies, he added.

There is a lot of concern, Prof Moynagh said, around the possibility that the variant (known as VUI-202012/01) might “bypass the [Covid-19] vaccine” or that treatments such as “convalescent serum” – antibodies from people who have had Covid-19 which help patients recover – would be rendered ineffective. But he believed both possibilities were unlikely.

There was a possibility too the variant infects more efficiently, he pointed out. So in asymptomatic people it lasts longer. If that is the case, it has more opportunities to spread disease.

A big concern is that it is still unclear how many factors had been driving up the transmission of late. While it is likely the variant has influenced transmissibility, high rates of transmission have also been observed in of areas under higher restrictions – not to mention the recent resurgences in much of northern Europe.

UCC-based immunologist Dr Anne Moore said it is always very difficult to disentangle cause and effect in these cases but there is already evidence transmissibility is faster than usually seen in communities, though there was insufficient genomic data to come to a definitive verdict.

The large increase in cases throughout much of Europe could be due to a lot more movement in advance of Christmas, or indication this variant is in wide circulation – or both. The UK is ahead of most countries in profiling variants arising in populations, she added. A few cases with the new variant have been reported by Iceland, Denmark, the Netherlands, Belgium and Italy.

“We don’t know yet whether or not the virus actually has increased the severity, because the transmission of the virus so far appears to be reasonably restricted to people at 55 years of age and under; the vast majority of them so far.”

This is a group of people less likely to become severely ill, he noted. If, however, the variant moves to older people, who are much more susceptible to severe disease, “we will learn a lot more about whether the virus is more dangerous that the current circulating strains,” Prof Power told RTÉ Radio 1’s News at One.

There are clearly enough concerning indicators for this variant to warrant widespread genetic characterisation and global sharing of resulting data. This has to be combined with increased surveillance and interventions to curb transmission.

In such circumstances and in the immediate absence of a vaccine, Dr Moore underlined that physical distancing – “even at Christmas time” – remains the only sure way to stop transmission.

More than a third of population not staying within 10km of home 14:15
Trial of man accused of murdering David Douglas opens 14:12
Homeless man challenges continued detention after anti-lockdown protest 13:33
‘Everyone’s happy, everyone’s delighted’: More than 300,000 return to school 13:07
Covid-19 Vaccine Tracker: What's available in the Republic of Ireland and what else is coming? 12:50