Passenger demand likely to halve in face of coronavirus restrictions 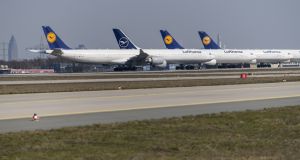 Air passenger demand could be halved, costing European airlines €70 billion in lost sales, as Covid-19 grounds flights across the continent, one industry body warned on Thursday.

The International Air Transport Association (IATA) predicted that demand for flights could tumble 46 per cent below 2019 levels while governments impose strict travel bans.

IATA said that its latest calculation was that European carriers, including Irish companies such as Aer Lingus and Ryanair, could lose $76 billion (€70 billion) in potential revenues as a result.

“A decline of this magnitude puts at risk about 5.6 million jobs and $378 billion (€343 billion) in gross domestic product supported by air transport,” the association said.

IATA wants European governments to give airlines cash support, tax reliefs and to guarantee their debts.

It called on governments to step up efforts to aid the industry. “Some European governments have already acted, including Norway, Sweden, Finland, Spain, and Italy, but more help is needed,” the organisation said.