Coronavirus: Dublin and Cork airports to scale back services 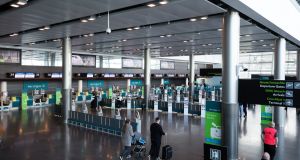 DAA has advised all passengers intending to use Dublin and Cork airports to contact their airline in relation to specific flights. Photograph: Tom Honan

Passenger services at Dublin and Cork airports are to be scaled back as a result of a reduce demand for flights due the coronavirus pandemic.

Trade unions said Aer Lingus had reassured staff there were emergency, temporary measures and normal pay and conditions would be restored once the situation had normalised.

In a letter to staff seen by The Irish Times, Aer Lingus said its action was designed to safeguard the financial position of the company and to allow it to operate a reduced schedule.

“We know these are unsettling times and we want to provide staff with certainty on a level of pay and working hours,” the airline said.

It said there could be a necessity for further measures if the number of flights was reduced further of if there was a full grounding of all operations.

Fórsa said it remained in discussions with other airlines including Stobart Air and Ryanair as well as agencies that provide cabin crew to Ryanair.

Airport operator DAA announced on Thursday evening that both Dublin and Cork airports will remain open but it plans to curtail its operations in response to a dramatic fall in airline passenger traffic in Ireland and across the world following the spread of the disease.

DAA also confirmed it will pay all staff their full salary for the next month.

The scaling back of operations at Dublin and Cork come as passenger numbers at the country’s two busiest airports have declined by up to 60 per cent on normal levels in the past week.

Although the number of flights has not declined in the same proportion, many airlines have announced plans for a major reduction in services from next week.

The number of flights operating at Dublin was down 22 per cent on Wednesday compared to the same day in 2019.

Many shops and restaurants have remained opened but all the bars in the airports are closed.

DAA said the level of future operations would be determined by a number of factors including the Government’s travel policies in relation to Covid-19, airline operations, and the travel policies of airports in the main overseas markets served by flights from the Republic.

DAA chief executive, Dalton Phillips, said passenger flights would continue to be facilitated in Dublin and Cork for as long as they continue to operate.

“We have a national responsibility to keep our airports open for Ireland’s supply chain and to help ensure that essential flight operations for cargo can continue,” Mr Philips said.

DAA has advised all passengers intending to use Dublin and Cork airports to contact their airline in relation to specific flights.

Mr Philips said the company had no choice but to begin to scale back passenger operations at both airports given the rapid decrease in the number of people on flights in and out of Dublin and Cork in recent days.

He stressed that DAA airports would continue to work with airlines to help get Irish citizens currently abroad home to their families and the allow passengers from overseas to do the same.

DAA also confirmed that it will pay all of its employees – 3,200 in Dublin and 300 in Cork – their rostered hours for the next month but all staff will be required to take one week’s mandatory leave or time in lieu.

The airport operator said it intended to use the period for essential maintenance, deep cleaning of airport facilities, and the regulatory training that is mandatory for many of its staff.

DAA has also informed staff there will be no pay increases in 2020, while all recruitment has also been frozen. Mr Philips said additional measures may also be taken.

The company is also examining the establishment of a volunteer Employee Task Force that would allow staff to offer their services to other State bodies during a critical period such as assisting the HSE, helping with community efforts or other activities.

Meanwhile, Fórsa and other unions at Aer Lingus said working time is being reduced for staff from April which will result in their earnings effectively being cut by 50 per cent.

They said the airline’s management had notified workers that Aer Lingus will be operating just 20-25 per cent of normal services in the coming weeks due to travel restrictions imposed in reaction to the Covid-19 public health crisis.

The company said the reduction in earnings would be implemented equally across all staff grades including senior management.