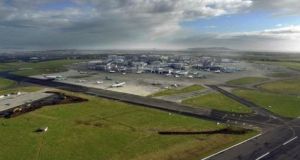 The North Runway will be 3.1km long and is located almost 1.7km north of the existing main runway

DAA has secured planning approval for amendments to its plans for a €320 million new runway at Dublin Airport, despite objections from the representative body of airline pilots.

An Bord Pleanála has rejected an appeal by the Irish Air Line Pilots’ Association (Ialpa) against the decision of Fingal County Council to grant planning permission to DAA for changes to the airport operator’s original plans for the new North Runway.

DAA had described the proposed changes to the plans as “minor physical amendments” which involved no operational changes. They include minor changes in the location and width of permitted taxiways and the airside perimeter fence, as well as new maintenance access roads, shelters for emergency vehicles and CCTV masts.

The changes also provide for the creation of elevated landscaped areas up to four metres in height around the perimeter of the runway to improve reflected navigational signals.

Ialpa had claimed Fingal County Council had failed to consider proper runway design and the long-term capacity and sustainability of the new runway. It said the council had given inadequate consideration to design issues raised by the pilots’ group and undue weight to the Irish Aviation Authority’s submission, which it described as “flawed”.

The association said the original runway design would achieve operational efficiencies, but the proposed design change was inferior and would not improve efficiency.

An Bord Pleanála rejected a request by Ialpa for an oral hearing on the case.

Fingal County Council said it had considered all issues raised by the association.

An inspector with An Bord Pleanála said that while the original runway design might achieve a higher standard of operational efficiency, an expert report submitted by Ialpa had not identified any fundamental flaws with the proposed changes.

He said the question of operational efficiency was primarily one for the operators and regulators to determine.

DAA said the changes were necessary due to the establishment of a new authority for aviation standards – the European Aviation Safety Agency – and revised regulations for runway and taxiway design, as well as to co-ordinate with the location of navigational aids used by the Irish Aviation Authority.

Preparatory work in advance of the main runway construction project of what DAA claims is vital infrastructure to cater for growing numbers using Dublin Airport began in 2017, while significant construction activity is ongoing on the site.

It is estimated the runway will allow Dublin Airport to achieve a 31 per cent gain in connectivity by 2034.

Construction work on the new runway is to be completed in early 2021 which will be followed by nine months of commissioning and testing before it becomes operational.

The North Runway will be 3.1km long and is located almost 1.7km north of the existing main runway.

It is being built in a joint venture between Limerick construction firm Roadbridge and Spanish infrastructure group FCC Construcción.

1 Over 400 complaints from migrant workers at meat plants lodged with WRC
2 Coronavirus: We must save lives but we also need to live
3 The Irish Times Company of the Year: the three finalists
4 Avoca warns of redundancies due to coronavirus
5 How to . . . move (almost) everything to your new phone
6 Staff at Dublin and Cork airports to vote on work practice changes
7 Moving in and out of lockdown is a recipe for economic disaster
8 Coronavirus spreads to sandwich king
9 McGann stepping down at troubled Aryzta
10 John FitzGerald: Exchange rate control no panacea for economic crisis
Real news has value SUBSCRIBE