Figures and deal to offload surplus planes are boost for carrier 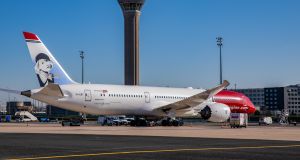 Norwegian Air unveiled higher-than-expected earnings and a deal to offload 27 new Airbus jets, sending its shares sharply higher on hopes that the low-cost carrier can avoid becoming the latest in a series of airline collapses.

The carrier on Thursday posted third-quarter net income of 1.67 billion crowns (€165 million), raised its 2019 savings goal and outlined plans to cut capacity while increasing operating profit by NKr4 billion over two years. Its stock surged as much as 23 per cent.

Under a long-awaited joint venture, Norwegian will sell its A320 NEO planes on order from Airbus to a new leasing company 70 per cent owned by China Construction Bank, generating a much-needed cash profit on each aircraft due in 2020-23. “This company is pulling out all the stops to get better,” said Bernstein analyst Daniel Roeska, who warned last week that

Norwegian was approaching a key debt default threshold. “With a potential gain of up to $10 million per aircraft, it could remove some of the pressure on the equity covenant,” Roeska said in a note to clients.

European airlines are braced for a tougher-than-usual winter marked by weakening demand and higher dollar-denominated fuel costs – factors that have already contributed to bankruptcies including Thomas Cook’s failure last month.

Norwegian Air’s six-year push into transatlantic and Asian routes shook up the long-haul market but led to heavy losses as the carrier expanded too fast. The airline has slammed on the brakes this year as it raised new capital and postponed debt repayments, but remains burdened by orders placed with Boeing and Airbus for dozens of jets. It cancelled five A320 orders earlier this month, according to Airbus data.

Norwegian has also been punished by problems with Rolls-Royce engines on Boeing’s 787 and the grounding of its 737 MAX after two deadly crashes with other operators – forcing their substitution by less efficient models on expensive leases.

Norwegian’s net income was up 28 per cent, beating the NKr1.47 billion expected by analysts, according to a Refinitiv poll. The carrier also said on Thursday it expects to cut capacity by 10 per cent in 2020 as it drops less profitable destinations yet to be announced. Investors will be updated on the details of its recovery plan in February.

“There will be tough decisions and we will be criticised for closing down routes or doing other things,” chairman Niels Smedegaard said, without elaborating on any potential job losses. “There is no way around it.”

While the company cannot rule out another share issue, Mr Smedegaard told Reuters, “it’s not our main focus”. The turnaround will also be driven by improved services, pricing and technology, Norwegian said, a week after it announced a partnership with US carrier JetBlue to offer passengers connecting flights on a single booking.

More planes are likely to be transferred to the leasing venture in future, Norwegian said.

The 27 Airbus aircraft earmarked so far will save $1.5 billion in capital expenditure, helping to reduce its NKr61.7 billion debt. The airline cut its spending guidance by $200 million this year and raised it by $100 million for 2020 as it adjusts to the grounding of the 737 MAX, expected to return to service in March at the earliest, according to chief executive Geir Karlsen.