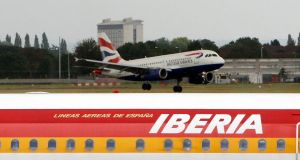 Irish-Danish technology developer Whispr is one of a number of companies backed by Aer Lingus owner International Airlines Group (IAG) in its latest support programme for start-ups.

IAG named 13 finalists from an original 474 applications for its Hangar 51 programme, which aids new companies whose products and services can be used in aviation and travel.

Whispr, based in Dublin and Copenhagen, was one of three finalists in the airport operations and logistics category.

Hugh O’Flanagan, the company’s co-founder and chief executive, explained at the weekend that Whispr converts manuals and checklists into voice instructions to which workers can listen and reply through an app and headset.

The system is designed for workers carrying out routine tasks such as regular aircraft maintenance checks, or refuelling, cleaning and turning around planes in preparation for takeoff on their next journey.

Mr O’Flanagan pointed out that workers doing those jobs have to be “on their feet, eyes up and hands free”, so face practical difficulties carrying manuals or checklists with them, particularly if they are outside in difficult weather conditions.

Whispr is working on a pilot project at Madrid Airport with Spanish carrier Iberia, an IAG airline, involving maintenance checks on Airbus A350 aircraft.

“It’s really important for us, because normally the challenge for a company like ours is that by the time you get through the procurement process with somebody like Iberia, you’ve no cash left,” Mr O’Flanagan explained.

If the programme is successful, the company hopes to expand it to other Iberia operations, and ultimately throughout IAG.

Whispr raised €670,000 last year and has contracts for versions of its application with hotel groups such as Radisson Blu. The company hopes to raise more cash in 2020.

IAG also owns British Airways and another Spanish airline, Vueling. Mosaic Technologies, which is developing a system for capturing and storing carbon emissions, is one of the other Hangar 51 finalists.

The group’s backing for this business stems from a commitment to reach net zero carbon emissions by 2050.