7% increase in passenger traffic at Knock airport in 2016 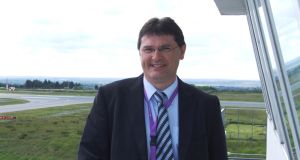 A record number of people used Ireland West Airport Knock in Co Mayo last year following a 7 per cent increase in passenger traffic. Some 734,031 people used the airport in 2016, an increase of 48,563 on the previous year.

The growth in passenger numbers was driven by four new services to Birmingham and Edinburgh with Flybe, Costa Dorada with Falcon & Thomson Holidays, and the arrival of the first charter service from Boston with Aer Lingus.

Extra capacity was also introduced on existing services from Barcelona, Bristol, Faro and Manchester. An extra 55,000 passengers used UK services to and from the airport, a 10 per cent rise on 2015. Knock airport now has routes to 23 international destinations and is served by three of Europe’s major airlines, Aer Lingus, Ryanair and Flybe.

The Co Mayo airport celebrated its 30th anniversary in 2016, a year when it welcomed its 10 millionth passenger, in July 2016. In addition, it received an investment by seven local authorities for an equity shareholding into the business. It also received just under €3 million in funding from the State for operational and capital purposes.

The managing director at Ireland West Airport, Joe Gilmore, said the record passenger numbers was “good news” for the regional economy in terms of tourism and job creation. In May, in partnership with Knock Shrine and Joe Walsh Tours, Knock will facilitate a historic charter to New York with Aer Lingus to see the remains of John Curry, the youngest person to witness the Knock Apparition of 1879, reinterred from the current location at Pine Lawn Cemetery, Long Island, to St Patrick’s Old Cathedral in New York City.

1 How much state pension will I get next year?
2 Oxford Covid vaccine trials offer hope for elderly
3 Ulster Bank to introduce new card payment controls on app
4 How long can Government afford to keep State pension age at 66?
5 The baroness with grande distribution in her blood
6 Apple planning updates to its AirPods earbuds next year
7 Covid-19 will worsen shortage of accountants, says CPA Ireland
8 Hurrah for the companies giving staff more time off
9 Investors unnerved by Brexit, Covid-19 and US election jitters
10 Budget 2021: fuel prices rise and high-emission cars hit
Real news has value SUBSCRIBE