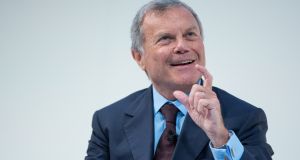 Martin Sorrell, chief executive of WPP: last year his pay package was £70.4 million, in cash and shares, taking the total he has earned at the advertising group since 2009 to £190 million. Photograph: Jason Alden/Bloomberg

Theresa May has retreated from some of her plans to crack down on executive pay, but business leaders continue to attack her. They are pleased the prime minister has toned down threats to force annual binding pay votes on companies but are still upset she is thinking of making them publish the ratio of chief executives’ pay to that of their workforce. The CBI employers’ organisation says ratios have the “potential to be genuinely misleading”.

I have been writing about executive remuneration for 30 years and have seen the best-paid bosses resist nearly every proposal aimed at slowing the upward movement in their pay. I have counted seven ways highly paid chief executives try to keep their critics away from intervening to limit their earnings.

We are worth it

Joseph Bachelder, the US lawyer who negotiated the pay deals of some of the best-paid US chief executives, laid out this defence when I interviewed him in 2004. During Jack Welch’s 20 years in charge of General Electric, he took home about $1 billion (€0.92bn). “On his watch, the market value of GE grew from around $12 billion to over $300 billion. Now for 20 years of Jack Welch, what did it cost the shareholders? Ten cents per share,” Mr Bachelder told me.

We need something to get us out of bed

A large salary is not enough. Chief executives need an incentive not just to work hard, but to apply their energies in the right direction. Some academics and investors worried about the “agency problem”: business leaders might do what was in their own interests rather than the shareholders’. To give managers an incentive to do what was best for the shareholders, companies gave them share options, which not only hugely boosted their pay, but led to some chief executives making short-term decisions to boost their rewards.

Chief executives say they do not set their own pay; the remuneration committees do that. As Sir Martin Sorrell, chief executive of WPP, wrote: “Some imagine that I wake up every morning and make decisions, including those over compensation, in the shaving mirror. WPP has a very independently minded board and compensation committee, which makes decisions that they believe are in the long-term interests of the company and its shareholders.”

I don’t have to do this job

When I began writing about pay, UK bosses told me it was unfair that chief executives earned so much more in the US, and that if British companies did not pay them more, they would go there. Over the years, chief executives have threatened to leave not just their countries but the publicly quoted sector. In 2008, we reported that Wolfgang Bernhard, a German motor industry high-flyer, had moved to a private equity firm because “he wanted to work without reading about his name every day in the paper”.

I could have been a player

So what if Dara Khosrowshahi, chief executive of Expedia, took home $94.6 million last year, and Leslie Moonves, head of CBS, got $56.4 million? According to Forbes, Cristiano Ronaldo made $88 million in 2015 and Lionel Messi earned $81.5 million. Shouldn’t executives employing thousands earn as much as people who kick a ball?

Possibly, but top footballers’ earnings really are determined by the market – how much their clubs and sponsors are prepared to pay them – rather than by a committee of their peers, past and present. If a committee of Gareth Bale, Zlatan Ibrahimovic and David Beckham decided how much Ronaldo should earn, the back-scratching would be obvious.

The other boys (and a few girls) have more than me

Publishing executives’ pay is clearly right; who could defend paying huge sums in secret? But once people know what others are earning, they insist on matching them. Companies feel their chief executives should be in the top pay quartile, otherwise why are they employing them?

Chief executives say people criticise their pay without understanding it. This is the objection to the pay ratio idea. They say comparisons are impossible. An investment bank CEO, whose employees earn a lot, will look more benevolent than a factory owner whose staff do not. True, but companies can explain that. Pay ratios would still be useful for comparing businesses in the same sector.

But do not expect the highest earners to stop trying to thwart reform. They have been doing it – and their pay has been soaring – for decades.