Could Microsoft’s Studio PC really take on the iMac?

Tech Tools: Pricey, but is it the answer to your creative needs? 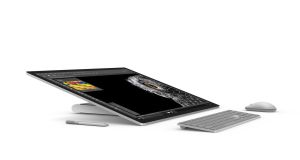 When Microsoft started making its own hardware, starting with the Surface, people were sceptical. But four product generations later, the Surface is still hanging around. Then came the Surface Book to satisfy those who wanted something a bit more powerful. Now there’s a desktop all-in-one: the Microsoft Studio PC. It’s a 28-inch PC that stuffs all the components into the base.

If you’re thinking iMac, you’re on the right track. There is one important difference though – the Studio is designed to be used either standing up or lying flat on the desk, like a drawing surface. The idea is that it appeals to more creative types. On the power side of things, the Surface Studio comes with a Core i5 or i7 chip and 32GB of RAM. There’s no word on Irish pricing just yet, but the starting point for the US is $3,000 (€2,800).

1 How long can Government afford to keep State pension age at 66?
2 Declan Ganley denies Donald Trump trying to swing lucrative 5G contract for Rivada
3 Brexit: UK and EU agree to intensify talks in rush for deal
4 Marquees and fleets of delivery vans: how supermarkets are ready for Lockdown 2
5 How to . . . transfer your game data to a new console
Real news has value SUBSCRIBE