The Irish Times Business Person of the Month: Joanna Murphy 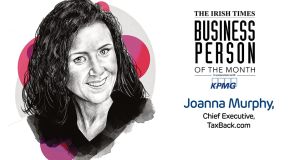 Joanna Murphy, chief executive of Taxback. com has been chosen as The Irish Times Business Person of the Month for October, an award run in association with KPMG.

Established in 1996 by Terry Clune as a business specialising in reclaiming tax for students who had worked abroad, Taxback.com has become a global provider of advice on tax refunds and compliance both to individuals and businesses. It now has 27 offices across Europe, Australasia, the United States and South America, and a staff of over 1,200.

In October, the company won a landmark legal victory in Australia when a court ruled that the country’s controversial backpacker tax cannot lawfully be applied to travellers from a number of foreign countries because of the wording of double taxation agreements.

Although the case focused on just eight countries - the UK, the United States, Germany, Japan, Finland, Norway, Chile and Turkey - the expectation is that the decision will lead to a change in the law, assuming it is not overturned on appeal. That would mean a windfall of up to 2,730 Australian dollars (€1,680) per year for any young working visitors to Australia since 2016, including the estimated 75,000 travelling from Ireland every year.