Uniphar has diversified under Rabbette, setting the foundations for a business that would ultimately raise €135m in an IPO 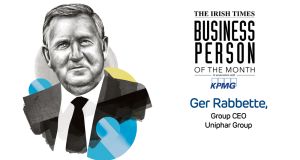 Pharmaceutical distribution industry veteran Ger Rabbette has been chosen as The Irish Times Business Person of the Month for July, an award run in association with KPMG.

Rabbette was hired in 2010 to help turn around Uniphar, the then-struggling drugs wholesaler and pharmacy chain owner. At the time, the industry was rattled by the economic downturn and a series of price cuts by the Health Service Executive (HSE) for the dispensing of drugs, while Uniphar was trying to recover from a €98 million writedown in 2008 on the value of scores of pharmacies.

The company, formed in 1994 through the merger of United Pharmacists Co-op and Allied Pharmaceutical Distributor, diversified under Rabbette into higher margin commercial services in 2014, setting the foundations for a business that would ultimately raise €135 million in an initial public offering (IPO) in July.

Uniphar’s fast-growing commercial division - which helps drug and medical device makers sell products - and its clinical and products access unit - which sources and supplies unlicensed medicines for retail and hospital pharmacy customers - have driven the business in recent years.