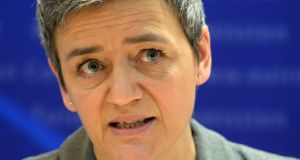 The European Commission has given its approval, under EU state aid rules, for the Government’s €3 billion National Broadband Plan.

The move paves the way for the Government to award the contract to its preferred bidder, US investment firm Granahan McCourt.

Government sources expect the final approval to be given by the Cabinet and the contract to be signed in the near future, perhaps as early as next week.

Sources said the Government would proceed despite a vote in the Dáil in favour of a motion calling for the network to be kept in public ownership.

The advice from the Attorney General about the Labour motion said that it would mean cancelling the existing procurement process and starting again. Government fears that this would delay the start of the roll-out to 2026.

One Government source also said that the Labour motion called for “two contradictory things – a new procurement process . . . and to roll out broadband as quickly as possible”.

Work on the project, which aims to bring high-speed broadband to 540,000 mainly rural premises, is expected to start next year and take up to seven years to complete, but the majority of homes should be passed by the new technology within the first three years.

Brussels said the scheme targeted areas where no broadband infrastructure offering download speeds of at least 30 megabits per second (Mbps) existed, and “where no private investor has demonstrated a concrete plan to invest commercially in the near future”.

Welcoming the decision, Minister for Communications Richard Bruton said: “Today’s decision from the commission allows the Government to proceed towards signing the National Broadband Plan contract with National Broadband Ireland [the vehicle set up by Granahan McCourt to roll out the project], which will commence the roll out of 147,000km of fibre to homes, farms, businesses and schools across our country.

He is expected to bring the plan to Cabinet in the coming weeks.

The Government has been under pressure to justify the cost of the broadband plan after it emerged earlier this year the price had jumped from the original estimate of €500 million to just under €3 billion and in the wake of Eir’s assertion it could complete the work for €1 billion.

Another bone of contention is the fact that the State will not own the network once it is built, despite the high level of state subsidy being provided.

EU competition commissioner Margrethe Vestager said on Friday: “The National Broadband Plan in Ireland is expected to address the significant digital divide between urban and rural areas in Ireland, enabling Irish consumers and businesses to benefit from the full potential of digital growth.”

“This will help households and businesses in areas of Ireland where private investment is insufficient,” she said.

The Regional Internet Service Providers Association (Rispa), the industry body that represents smaller rural wireless operators, says it is considering a legal challenge to the plan on state aid grounds, regardless of the commission’s view.

1 ‘I don’t need to do any of this. . .I don’t actually need to work.’
2 Basic income for all: Has the Covid crisis given us a new economic model?
3 Promontoria barred from pursuing doctor over Ulster Bank loan
4 Only way is up for Stripe as valuation skyrockets
5 Irish designer of Oxford vaccine: ‘I’ve never worked so hard in my life’
Real news has value SUBSCRIBE