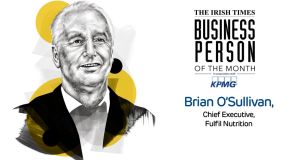 Brian O’Sullivan, the man behind one of the fastest growing brands in Ireland, has been chosen as The Irish Times Business Person of the Month for August, an award run in association with KPMG.

O’Sullivan, a long-time executive with confectionery industry giant Cadbury/Mondelez, joined protein nutrition bar group Fulfil in 2017 as chief executive. Just 18 months after it was founded, the group was struggling with the challenges overnight success can bring for a young company – supply chain and growth strategy.

O’Sullivan has since overseen the continued growth of the business which has doubled its revenues every year to date. It now sells into 10 key markets with a small core staff of just 24 people, aided by a network of industry experts.

Following its entry into the UK market, Fulfil Nutrition found itself getting the attention of private equity and industry groups and, in August, it signed a deal that will see American industry leader Hershey take a significant, though unspecified, minority stake in the Irish business.

The investment will not only help Fulfil fund its aggressive expansion plans but also opens the door to the US market - the world’s largest snacks markets - when the company feels ready to make that move.

For now, Fulfil expects to mark its fourth year in business with consumer sales of close to €100 million in 2019.