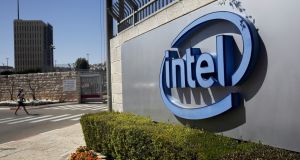 Intel has also resumed supply to Huawei Technologies, deeming some sales are permitted even under restrictions.

Intel posted second-quarter sales and profit that topped analyst projections and gave an upbeat third-quarter forecast, signalling the chipmaker is weathering disruptions to the electronics industry caused by the China-US trade dispute.

Separately, the company said it agreed to sell the majority of its smartphone-chip business to Apple in a deal valued at $1 billion, completing the wind-down of a multibillion-dollar, decades-long effort to break into the mobile industry. Intel shares jumped as much as 8 per cent.

Revenue is getting a boost from increasing personal-computer demand, which is still outrunning supply, chief financial officer George Davis said.

Purchases of higher-priced server chips and demand from new markets outside of computing are also bolstering sales.

Some of the added PC-chip demand is coming from customers anticipating future tariffs related to the China-US trade dispute, and that demand can’t be expected to continue at the same level, he said.

It was an “extremely positive quarter,” Davis said in a phone interview. “Some of the beat in the second quarter was trade- and tariff-related as customers pulled in demand from the second half of the year.”

Intel shares rose as high as $56.33 in extended trading following the report. The stock had earlier slipped 1.4 per cent to $52.16 at the close in New York.

Shares have gained 11 per cent this year, lagging behind the 38 per cent jump in the benchmark Philadelphia Stock Exchange Semiconductor Index.

Second-quarter sales were $16.5 billion, the Santa Clara, California-based company said Thursday in a statement. Analysts on average had predicted $15.7 billion, according to data compiled by Bloomberg.

Net income was $4.2 billion, or 92 cents a share, compared with estimates for 85 cents. Gross margin, or the percentage of sales remaining after deducting the cost of production, was 59.8 per cent in the quarter.

Intel’s target range for the metric, a key indicator of efficiency for a manufacturing company, is above 60 per cent.

Intel has also resumed supply to Huawei Technologies, deeming some sales are permitted even under restrictions imposed on the Chinese company by the Trump administration. That has helped reduce the impact of trade tensions on the company.

Revenue in the current period will be about $18 billion, and net income will be about $1.16 a share, Intel said. That compares with average analysts’ estimates of $17.9 billion and $1.13 a share.

For the year, Intel is now predicting revenue of about $69.5 billion and earnings per share of $4.10.

Intel’s Xeon processors account for more than 95 per cent of the market for chips that run servers, the machines that provide the backbone of the internet and corporate networks.

In the second quarter, the data centre division posted revenue of $5 billion, a decline of 10 per cent. The PC chip business had sales of $8.8 billion, a gain of 1 per cent.

The company said newer businesses – chips for connected cars and machinery – helped fuel the better-than-predicted performance in the quarter.

The company’s Mobileye self-driving car technology unit had sales of $201 million, up 16 per cent from a year earlier. Internet of things revenue rose 12 per cent to $986 million.

Though it topped estimates, the recent quarter’s revenue was down 2.7 per cent from a year earlier, representing the first quarterly drop in four years.

In last year’s second quarter, Intel posted sales of $17 billion and earnings of $5 billion, or $1.05 a share. – Bloomberg