Alphabet also said it will repurchase $25bn of stock, the biggest buyback in its history 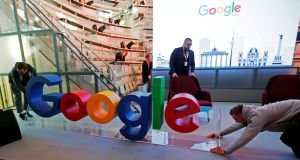 Workers move a Google logo during the opening of the new Alphabet’s Google Berlin office in Germany.

Second-quarter sales, excluding payments to partners, came in at $31.7 billion, Alphabet said in a statement. Analysts were looking for $30.8 billion, according to data compiled by Bloomberg.

The Google parent also announced a plan to repurchase $25 billion of the company’s Class C stock, the biggest buyback in the company’s history. The cloud business grew strongly, too. Alphabet shares rose more than 9 per cent in extended trading.

Google’s advertising sales grew 16 per cent overall. That was slower than many recent periods, but it was a welcome relief from the first quarter of 2019, when Google missed Wall Street revenue expectations and saw its shares plunge. The stock had lagged rivals recently on concern poor results might continue.

Google is still able to find more places to put ads around the web, said Christopher Rossbach, chief investment officer at J Stern and Co, which owns Alphabet shares. “Many of Google’s growth opportunities remain. For example, advertising on its Maps properties,” he added.

For years, Google has grown its advertising business at an annual rate of at least 20 per cent by stuffing more ads into mobile search results, luring viewers to YouTube and automating the web’s complex advertising process.

The company is investing heavily in new technology, such as cloud computing and a voice-controlled digital assistant, while experimenting with different ad formats.

“We’re delivering strong growth,” Ruth Porat, chief financial officer of Alphabet, said in a statement. “Our ongoing investments in compute capabilities and engineering talent reflect the compelling opportunities we see across the company.”

That’s around a quarter of the sales produced by Amazon.com’s AWS cloud unit, but the solid growth gave investors hope that Google can keep pace with Amazon and Microsoft in this booming business.

Other revenue, which includes cloud business and consumer hardware, grew 40 per cent to $6.18 billion.

Another positive sign for investors: Capital expenditures totalled $6.9 billion in the second quarter, up 30 per cent from last year. The same quarter last year saw a year-over-year increase of almost 90 per cent.

That said, Porat indicated costs would increase through the rest of 2019. The company plans to hire more employees for the cloud business, YouTube and the machine-learning field.

Sales and marketing costs will also grow at the end of this year as Google promotes its products for the holiday season, she said.