Anyone for Fortnite? The appeal of the World Cup 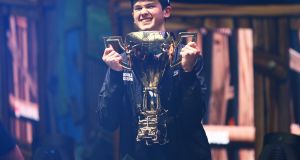 That is all in the future, though. This weekend, Arthur Ashe Stadium was teeming with, well, teenagers. There were also preteens (with their attendant parents) and men in their 20s, and occasionally 30s. But there were a lot of teenagers.

They made their way to the USTA Billie Jean King National Tennis Center in Queens to watch their favourite competitors play their favorite game: Fortnite.

Fortnite Battle Royale is a video game in which up to 100 competitors are dropped onto an island and must try to survive, via fight or flight. Almost all of them are killed; the lone surviving individual or squad is the champion.

If you have never heard of Fortnite, you are almost two years behind. If you think it is silly that people pay to watch strangers play video games, it is more like 10 years.

For the first Fortnite World Cup, Epic Games, the publisher, struck a deal to take over the tennis centre for three days. It was the last possible weekend to do so before the US Open build-out begins in earnest.

“If I was sane, that last weekend probably would have been about 30 days ago,” Daniel Zausner, the chief operating officer of the tennis center, said. With a limited window to host events in nice weather that do not interfere with the Open, Zausner said, the Fortnite World Cup was attractive because of its young audience. “This just breaks down a barrier for people that are not that familiar with tennis or not that familiar with the venue,” he said.

A multitiered stage weighing almost a quarter-million pounds hung from hundreds of cables fastened to the roof of the stadium. Needless to say, structural engineers were required. Racks upon racks of servers were assembled in the commissary, connected to hundreds of computers and video cameras by 25 miles of fiber-optic cable. More than 60 tractor-trailers of equipment were unloaded, including one filled mostly with gaming chairs.

Like an inverted panopticon, 100 screens featured the views of 100 cameras, letting the audience in the far reaches of the stadium watch the competitors. Giant 4K LED screens showed in-game action, and smoke machines, spotlights and confetti went off after matches. The sound of virtual battle was so deafening that ear plugs were included with media credentials.

“That will make everything better,” one mother said while buying a cocktail during Friday night’s celebrity pro-am event. “I can’t take it in there anymore.” On the other end of the spectrum, one family of three wore T-shirts that read, “We’re Not a Regular Family, We’re a Fortnite Family.”

Fortnite’s aesthetic is silly – the game is cartoony, there is no blood or gore, and characters do comical dances. But the World Cup is deadly serious. Forty million players participated in online qualifiers, and Epic Games will give out $30 million in prize money, including $3 million to the winners in both the solo and duo competitions. That is more than Novak Djokovic and Simona Halep earned for winning Wimbledon this month.

The biggest esports tournaments are typically held in NBA arenas, but Epic Games prized the tennis centre because its acres of grounds could support an immersive Fortnite festival that felt quite different from the typical “sponsor activations” seen at sporting events.

Various carnival-style games, with names like Glider Zipline and Pickaxe Pit, were set up. Fans who wore an RFID wristband that connected to their Fortnite account could earn rare virtual items to be used in the game. They could drink Slurp Juice and chomp on a Tender Defender Sandwich or opt for Uncle Pete’s Pizza Pit.

The entire preceding paragraph makes a lot more sense if you play Fortnite, and the deep immersion is the point. “This is about their subculture, and people enjoying that,” said Stuart Saw, head of esports at the sports and entertainment conglomerate Endeavor. Endeavor teamed up with Epic Games last year and led the event logistics and venue operations for the World Cup.

Saw compared the fan experience to the newly opened Star Wars-themed area at Disneyland Park in California. “If you bring Star Wars to life, like they have done, there is a level of detail that has to go into it,” he said. “Because it means so much to people.”

Given the expensive construction and the gobs of prize money, it is difficult to imagine that Epic Games will directly profit on the World Cup. The suites inside the stadium were not sold, nor were sponsorships and television media rights. Tickets for the entire weekend cost about $50 to $150.

“Their ticket prices could have been 10 times what they were,” Zausner said. He added: “As you can tell from their model, they are not out there hawking sponsored products. They are about their brand identity.” Befitting a virtual game entering the physical world, the entire experience was aggressively online. Signs posted everywhere warned spectators that they were consenting to being filmed by Epic Games, and the company was not the only one filming. At one point, four men in their 20s walked by chanting indecipherably, pointing a phone at their faces to livestream.

Looking at his phone while going up an escalator, one competitor marvelled at his social media performance. “Bro, I’ve gained so many followers since I got here. Like 600.” “Just wait until you compete,” his friend told him. – New York Times