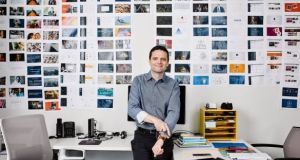 Workhuman, the Irish company which achieved “unicorn status” earlier this year after a new investment that valued it at $1.2 billion (€1 billion), is predicting double-digit growth again for 2020.

The software company founded by Eric Mosley and Eddie Reynolds in 1999 has benefitted during the coronavirus pandemic as organisations seek to reward employees for going the extra mile during the crisis.

Mr Mosley, the company’s chief executive, said trading to date this year had been good and was expected to finish strongly given the fourth quarter was traditionally Workhuman’s busiest period.

Formerly known as Globoforce, the group operates employee reward and incentive schemes on behalf of some of the world’s biggest companies, including Cisco, GE, LinkedIn, Procter & Gamble, Symantec and KPMG. More than five million employees are on the Workhuman platform across 160 countries.

The company has just reported full-year figures for 2019, which show revenues rising by more than a third to $617 million (€518 million) as pretax profits jumped from $32.2 million to $88.9 million, due in part to a change in accounting estimates.

About $3.86 per share was paid to shareholders as a dividend.

“Workhuman isn’t that small of a company any more so to see 37 per cent year-on-year growth shows that we’re tapping into a growing need in the HR world and that has only increased recently,” Mr Mosley said.

“At the start of the pandemic there were reports of a surge in productivity at companies as employees working at home put in extra effort but that waned over the summer months and so what we’re offering helps to counteract that and keep staff motivated,” he added.

Workhuman became what is believed to be only the second Irish company after Intercom to officially confirm it has reached unicorn status, a title given to privately held tech companies worth $1 billion or more, earlier this year. The move came as Intermediate Capital Group (ICG) acquired a 10 per cent stake for $120 million from departing shareholders.

The company employs more than 600 people in total, with more than half of them in Dublin. It recently announced a number of new appointments to its board, including Annraí O’Toole, chief executive of Utmost, former European chief technology officer at Workday and co-founder of both Cape Clear Technologies and Iona Technologies.

Mr Mosley said Workhuman had added 40 new customers to its platform since the pandemic began and forecast continued growth over the coming year as organisations start to bring more employees back into the workplace.