Electrical ‘leakage’: How NovoGrid aims to combat wastage from the grid

GridBoost, an initiative by the UCD spinout firm, is aimed at wind farm owners 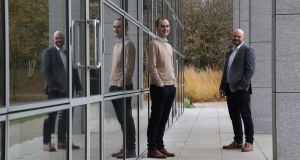 As electricity moves through the network, up to 7 per cent of it is lost. This is a natural phenomenon, but a costly one. Those generating the electricity, and ultimately consumers, pay the price.

NovoGrid is an Irish software company that aims to prevent the loss. By doing so, it can help save electricity, save money and maybe even the planet. A pilot of its GridBoost software with ESB Networks at an SSE Renewables wind farm in Co Wexford has seen a saving of more than 300,000kWh of renewable electricity over two years. That’s enough to power 70 Irish homes a year.

GridBoost is a patented technology, which automates and removes inefficiencies in renewable generators and electrical grid operations. It was developed by Prof Andrew Keane and his team at University College Dublin. NovoGrid, a UCD spinout company, was established in 2015 to commercialise the technology.

The problem of loss is a natural phenomenon of physics, says NovoGrid co-founder and chief commercial officer Paul Manning. “Take your laptop. It has a fan inside it to cool it down, but that heat is coming from the electricity. The exact same thing happens on the wires as the electricity passes through,” says Manning. This loss of electricity benefits nobody. “Everybody pays for the losses that occur in getting electricity from A to B on the system – the wind farms and the average householder, where the cost is embedded in their standing charge.”

ESB’s 2019 report states some 6.6 per cent of all electricity that comes on to their network is lost in this way, says Manning. “It’s a big amount.” The planet pays too. “That lost electricity has to be made back up by over-generating from fossil fuels, which is more expensive and bad for the environment.” Stemming the loss means lower electricity generation costs, lower bills for consumers and less need to plug the gap with energy from less environmentally friendly fossil fuels.

GridBoost is aimed at wind farm owners. “The wind farms generating electricity are sending it out on to the grid, a certain amount of it is lost and that’s deducted off the money that they get from the market,” says Manning.

The business model is a relatively low-cost installation fee for wind farms with NovoGrid taking a cut of the ongoing savings. In the Wexford pilot, the wind farm saved 0.5 per cent of its annual electricity output. “That doesn’t sound like a hell of a lot, but these wind farms are such marginal businesses,” says Manning.

Prof Andrew Keane described the GridBoost pilot project with the ESB and SSE as a key milestone for the company. “The world is shifting away from fossil fuel to decentralised energy resources, and technologies such as GridBoost are needed by grid operators and renewable generators to manage that transition in an efficient and rapidly scalable way.”

GridBoost is already installed in a number of wind farms in the UK, and trials are also under way in Germany. But Irish wind farms will have to wait. “In the UK, wind farms have a mechanism to recoup this cost back, to effectively get paid for providing this service,” says Manning. “The old grid was basically where generators sold power on to the grid, and they had a single source of revenue. Now it’s all about services. A line loss reduction service is effectively what we are able to let them offer the grid. They get paid for that in the UK because there is a mechanism to capture that. In Ireland there isn’t. That’s the challenge we have.”

Manning is calling for a change in regulation here. “The regulation covering how losses are charged back were written in 1999,” says Manning. That’s back when Prof Andrew Keane was doing his Leaving Cert. “Technology has overtaken that regulation, which doesn’t capture new advanced smart controls that give back.

“We are looking to get the Commission for the Regulation of Utilities to open up a consultation to review things in light of new technical advances. We’d like to make submissions to that.”

Enabling wind farms in Ireland to reap benefits from the software could help the country achieve its climate change targets, too. A 2015 Sustainable Energy Authority of Ireland-funded report found that installing GridBoost across the Irish wind farm fleet would save Irish energy customers €2.2 million in costs and 16,300 tons of carbon dioxide per year.

Such benefits equate to a significant percentage of the emissions targets for the electricity sector by 2030, as laid out in the government’s Climate Action Plan 2019. In addition, these emission reductions would be achieved at a negative abatement cost. With more wind farms now and more solar facilities coming on stream too, which can also avail of the technology, the savings would be even greater today, says Manning.

“There are not many climate change initiatives where we can say, ‘Hang on, you guys will get paid to do this rather than it being a cost to the exchequer or the country.’ ”

NovoGrid took on €500,000 in funding last year, which it has been using to push sales in the UK, fund a pilot in Germany and hire staff. “We now have 4.5 staff, we are all about the efficiencies,” jokes Manning. “The aim now is to keep pushing on with targets in the UK, raise a larger round, and we want to start adding more and more products. There is a huge amount of R&D going on from our end.”

1 Admission of mistake in Oxford vaccine dose raises doubts over reliability
2 Cliff Taylor: Deal or no deal we are now heading for a hard Brexit
3 Karlin Lillington: How I managed to cut my mobile phone bill by at least half
4 Last orders for Rí-Rá and Globe as Central Hotel gets green light to expand
5 Move to EU or face disruption, City of London is warned
Real news has value SUBSCRIBE