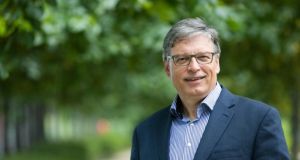 Arkphire chief executive Paschal Naylor: deal will ‘equip us with the ability to extend our global reach and further evolve our service offering to customers’

Irish IT consulting and managed-services company Arkphire is to be acquired by US firm Presidio for a total cash consideration of $142 million (€120 million).

Presidio, a New York-headquartered IT solutions provider, said the deal would provide it with a strategically significant hub and platform to drive business expansion across both Europe and Asia Pacific.

Dublin-based Arkphire employs more than 240 people. Earlier this year it completed the acquisition of fellow Irish company Trilogy Technologies to create one of the largest and fastest-growing locally based IT procurement and managed-services businesses in the country.

“This announcement with Presidio is great news for Arkphire, our people and our customers, equipping us with the ability to extend our global reach and further evolve our service offering to customers in response to the needs of the market,” said chief executive Paschal Naylor.

Arkphire reported pretax profits of €6.6 million for the year ending June 30th, up from €4.6 million in 2018. For the same period it recorded record revenues of €126 million, a 40 per cent rise on the prior year and up from just €20 million five years ago.

The company dates back to 1981, when it was known as Memorex Telex. It has had several incarnations since then. After a takeover in 1998 it rebranded as EDS Global Services, before becoming AO Systems + Services Ireland when it was acquired by the German-owned IT provider AO Group in 2006. It returned to Irish ownership in 2009 following a management buyout and relaunched as Arkphire in 2011.

It secured a multimillion investment from London-based private capital firm Bregal Milestone in late 2018 to aid growth. More recently, it opened an office in Singapore and appointed its first head of Asia Pacific as it targets growth in the region.

Presidio, which has 7,300 middle-market, large, and government organisations, employs 2,800 people across 57 offices in the US.