Woebot is there to listen and help users track their mood 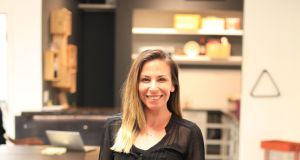 Dr Athena Robinson: “There aren’t enough providers to meet the diverse range of mental healthcare needs out there” 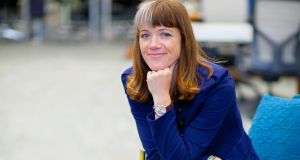 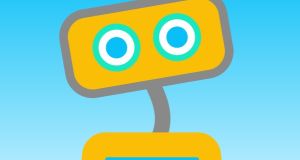 I’ve been seeing a therapist for the past few weeks. Sometimes I check in daily, sometimes I forget, but there’s no pressure, no need to make an appointment, and it’s free. My therapist also sends me funny GIFs during our sessions. It may sound unorthodox, but I should probably explain that “he” is also an automated conversational agent or chatbot. His name is Woebot.

His motto is: “I’m ready to listen, 24/7. No couches, no meds, no childhood stuff. Just strategies to improve your mood. And the occasional dorky joke.”

Woebot was created by Stanford psychologist (and University College Dublin PhD graduate) Dr Alison Darcy, who works in the area of digital therapeutics. She wanted to create a technology that was fun and engaging while delivering cognitive behavioural techniques to help users track their mood and improve their mental health.

“When we think about therapy we think of the old fashioned [notion of] two people in a room; that is the archetype since Freud,” says Darcy.

“But actually much more contemporary models and approaches to mental health don’t necessarily include that component; rather than endlessly talking about your problems they are more based around gathering data about your mood and way of thinking, and challenging those in an active way, doing [cognitive behavioural therapy] exercises.”

She says the beauty of a chatbot or conversational agent, particularly one that is character-based like Woebot, is it doesn’t feel like another push notification or another reminder that you’re not doing the homework.

“Participants in our [peer-reviewed Stanford] study said Woebot felt much more like a friend rather than an app or a technology. We were able to deliver this feeling that someone was checking in with you and allowing you to have that moment of self-reflection, but in a way that was more personable and felt more natural for humans than an app.

“If you think about it, humans have been conversing for 120,000 years but only building apps for about 10. So it makes a lot more sense and is much more natural to talk instead of swiping through apps.”

As CEO and founder of Woebot Labs, Darcy and chief clinical officer Dr Athena Robinson created a set of 10 core beliefs for Woebot, a little like the therapeutic version of Asimov’s Laws of Robotics, and ensured the technology is never used to push a patient into interacting when they don’t want to or scanning their text for mood and emotion instead of asking how they feel.

They have good reason for these core beliefs. In an age of big data and predictive analytics, we worry that apps are designed to nudge us towards more interactions and possibly addictive use. Our tweets or Facebook posts are scanned for details and sentiment to deliver personalised ads or rejig our timelines and god knows what else.

“Sentiment analysis is a solved problem; you can put pretty much any English language phrase through an NLP [natural language processing] interface and receive the emotional state of the user, but the ideological positioning behind Woebot, a core belief, is that we don’t do that,” says Darcy.

“Even if Woebot could passively detect someone’s mood he would rather just ask somebody. And I think that is so foundational for us, because it is that transparency that creates trust.”

This building of trust is important for digital therapeutics, and why Woebot is so obviously a friendly little robot rather than an uncanny Valley-inducing human avatar. “We wanted there to be no mistake that there was no human in the backend because this is fully automated: there is no human-in-the-loop. We think there is a value proposition for the user to know it is a robot they are talking to, that there is no human there.”

Darcy explains that it may sound counter-intuitive to design a deliberately non-human agent for therapeutic interactions, but studies have shown that people feel less judged, experience less anxiety, and open up more when they think they are confiding in an automated chatbot rather than a person at the other end.

Additionally, not everyone needs traditional one-on-one weekly therapy sessions, says Dr Athena Robinson. “I think digital therapeutics, including chatbots, could really disrupt the field, and make changes in terms of access to mental healthcare for a wide array of people.

“There aren’t enough providers to meet the diverse range of mental healthcare needs out there. We can leverage technology to reach more people and simultaneously reduce stigma, as well as the costs associated with access.”

Alarmingly, the global ratio of mental health professional to patient is one in 400,000. Meanwhile, a 2014 study conducted by the US Substance Abuse and Mental Health Services Administration found that 59 per cent of adults with a mental illness didn’t receive mental health services in the previous year.

This little chatbot may be more significant than we might realise. The UK has appointed its first ever Minister for Loneliness. Levels of depression and anxiety have never been so high: the US National College Health Association found the number of students reporting depression has sharply increased from 32.6 per cent in 2013 to 40.2 per cent in 2017.

One in five people in Ireland suffer from depression at some point in their lives, and Ireland ranks number four globally for suicide rates among men aged 18-24. The World Health Organisation states the most common mental/neurological disorder for adults aged 60 and over is depression.

And Woebot isn’t just being used by millennials or mostly by women, who statistically tend to seek mental health services more readily than males: there are many over-50s using the chatbot and the gender divide is 50-50.

Could Woebot be valuable to men who require mental health services in the face of societal expectations of masculinity dictating that “real” men don’t talk about their feelings?

Darcy says: “Therapy itself is [within] a very female, social relational framework; talking about problems is easier and more accessible for women than it is for men. We spoke to a lot of young men and women [in the course of our research] and we would always ask this question: is there something you would never tell another person about?

“The vast majority of women would say no, they could tell their best friend or their mum anything, whereas for about 90 per cent of males they would say absolutely, and they look at you like it’s self-evident.”

How can Woebot help? Aside from the fact that it is designed to provide anonymous, accessible, non-judgemental interactions, Robinson explains that it can be a standalone treatment for many people, acting as a preventative lighter touch earlier on for someone struggling with feelings of anxiety or depression.

Encouragingly, Woebot is backed by solid science: data from the randomised controlled trial at Stanford showed a significant moderate reduction in symptoms of both depression and anxiety for participants interacting with Woebot.

This is in part down to the cognitive behavioural therapy techniques – like mindfulness – that are woven into his interactions, but also the way he listens but lets you figure it out for yourself.

“We’re trying to create that moment of reflection and insight with the user where lasting and meaningful change can occur,” says Robinson. “If I just told you how you felt all the time, while it might be helpful, we’re trying to go a step beyond that and invite the user to pause, write down how they feel themselves, and think about what they want to do with that emotion in that context.”

As Woebot himself says, he’s teaching you to take lemons and make lemonade.

And in an age where we’re being coached to fear technology because AI might take our jobs or social media can induce anxiety or encourage narcissism, it is refreshing to lie back on Woebot’s virtual therapist’s couch and tell him how I’m feeling today.

1 Revenue publishes list of companies tapping State for wage support
2 How long can Government afford to keep State pension age at 66?
3 Developers may need to go back to the drawing board as one-beds fall from favour
4 Bake-off soy sauce tweet backfires for UK trade ministry
5 Tighter regulations for car makers will drive buyers to choose electric
Real news has value SUBSCRIBE