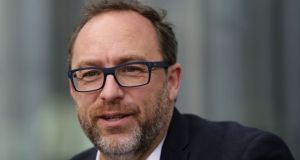 Wikipedia founder Jimmy Wales is to visit Dublin late next month to discuss the fight against fake news and how evidence-based journalism can help to combat threats to online knowledge sharing.

Mr Wales, who recently announced WikiTribune, a new online platform that brings journalists together with volunteer contributors to ensure accurate reporting, will appear at a public event in Trinity College Dublin on October 26th as part of Ireland’s Internet Day.

Now in its third year, the event aims to promote awareness, knowledge, use and understanding of the internet by highlighting its impact on society. Previous keynote speakers include futurologist Rudy de Waele and Emma Sinclair, the youngest person ever to float a company on the London Stock Exchange.

Mr Wales, previously ranked as one of Time Magazine’s most influential people in the world, founded the free encyclopaedia, Wikipedia, in 2001. Wikipedia is the fifth most visited website globally and counts half a billion unique visitors each month.

He is also the president of Wikia, a for-profit wiki hosting company that allows users to build their own specialised wikis typically relating to a specific interest.

On a mission to combat the rise of fake news with evidence-based journalism, Mr Wales is behind WikiTribune, a collaborative online news publication that allows journalists and volunteers to work side by side, co-researching and co-writing articles together.

Tickets for Mr Wales’ appearance in Dublin cost €15, with all proceeds going to CoderDojo, the volunteer programming club for young people.

The event is hosted by IE Domain Registry, the company which manages and maintains Ireland’s country domain name. It recently unveiled plans to loosen rules that oblige applicants for a website domain to prove they have a valid claim to the name as part of a new vision for internet governance in Ireland that will be announced on Internet Day.