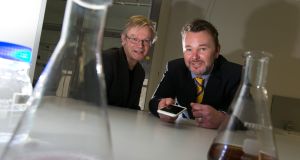 John Browne is the founder of precision technology company Kastus. Ten years of scientific research at Crest DIT led to the development of a novel, patented, invisible antimicrobial solution that can be applied to hard surfaces such as metal, glass and ceramics in the manufacturing process. It uses natural light to destroy harmful bacteria such as MRSA and E. coli.

Having been formally established as a company 3½ years ago, the company closed out a €1.5 million round of funding with Atlantic Bridge at the end of last year. The company currently employs six people and plans to double the workforce in the next six months.

Our products don’t leach any harmful by-products as they are water-based and use natural light to kill bacteria, so there are no negative effects on the environment or on human health. That sets us completely apart from any potential competitor. Ours is a water-based, physical reaction as opposed to a chemical reaction which other processes use.

We are dealing with companies, ranging from mobile-phone manufacturers to manufacturers of sanitaryware such as toilets and sinks, products that involve metal, glass, ceramics, plastic. The applications are endless.

Our product doesn’t impact on the surface finish, which is something that necessitated a lot of investment. People want the product to be permanent, highly effective and highly robust.

To be honest, to be yourself and to respect people. We’ve all come across people who can put on a front and they can come across as not being necessarily trustworthy or as being difficult to deal with. [This advice] worked for me. I tend to take everyone at face value and treat everyone the same. Everyone gets the respect they deserve and I seem to have built a superb network of contacts by sticking to that mantra over the years.

Sometimes being a bit conservative and not jumping quick enough. Also possibly issuing shares too cheaply and being overly generous. It is probably because I want to bring people along who I believe deserve a share. Some of the salty old advisers I deal with would probably want me to have the minimum possible number of shareholders.

I think it’s about finding a balance. I think it’s vitally important that key staff have a sizeable chunk of shares to keep them engaged and fully invested in terms of owning the business.

Having our global patent granted and, off the back of that, securing the investment funding towards the end of last year. We couldn’t have got the investment without the patent. It’s a lengthy, time-consuming, expensive process and sometimes you feel that you don’t have any control over it. Securing the funding from Atlantic Bridge shows that they share our enthusiasm and optimism for the project.

One of the big positives that has come out of the Atlantic Bridge investment, in addition to the funding, is that Chris Horn has come on board as a director of the company. Having worked in the IT sector in the past, I was well aware of Chris’s reputation and having worked with him over the past year, I’ve huge respect for him. He’s hugely knowledgeable, very generous with his time, very well respected in general and is a person that I would like to keep on board for as long as possible.

Luckily, I guess, we haven’t had to test that yet. They say they are open for business but let me get back to you if I’m ever in a position where we have to apply for a loan – which hopefully won’t be the case.

More motivation for entrepreneurs and people starting businesses in terms of tax treatment and in terms of share option treatment from a tax perspective. It’s currently a demotivator for people going into business at an early stage. You can end up with significant tax liabilities even selling shares to people and taking investment into a business, which I think is unreasonable. It is difficult to give share options to key staff at the moment because of the way share options are looked at by the Revenue Commissioners. I think that is something that needs to be looked at urgently.

The time between starting the business up and having the patents granted was the greatest challenge. It’s the time where, effectively, the company has little or no value because, without the patents, it’s weak. They can be lean times and you can be doubting yourself while you’re waiting for the process to get over the line. You can doubt yourself because you basically have a piece of technology that you can’t even sell because it’s not protected.

Absolutely manic, which we’re really looking forward to. We already have planned collaborative scaling trials with customers in the UK, the US and the Middle East. There is going to be a lot of travel and a lot of direct involvement from everyone to get to the point where we are closing deals.

It’s great to be jumping on planes to meet people from multinational companies – household names – who are interested in validating our product. It’s a relatively technical, long sales cycle, so we expect our first product into the market in Q4 this year.

I know exactly what it is worth at the moment based on the recent investments but I cannot tell you. Maybe come back to me in three years’ time and I might have an answer for both of those questions. I certainly have no intention of selling up at this point. I think we are about to build a very significant valuation on our business, certainly into the tens of millions.

1 How much state pension will I get next year?
2 Oxford Covid vaccine trials offer hope for elderly
3 How long can Government afford to keep State pension age at 66?
4 Hurrah for the companies giving staff more time off
5 Greencoat Renewables acquires Tipperary wind farm
Real news has value SUBSCRIBE