IPO could value company at €2 billion 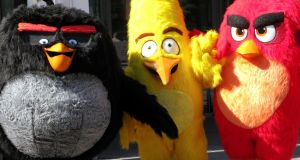 The Angry Birds game is enjoying a resurgence

Main owner Kaj Hed (62) and some other holders will sell shares, and Rovio will offer about €30 million of new stock, the company said on Tuesday, without providing a total value for the sale.

The IPO could value the maker of the Angry Birds mobile games and movie at about $2 billion, sources said.

Rovio has emerged from a slump after changing the way it charges for game playing, and an IPO gives chief executive officer Kati Levoranta ammunition to develop new titles.

The listing is set to test investors’ appetite for entertainment software, a group whose shares have barely budged from their offer prices following IPOs this year, according to data compiled by Bloomberg.

Mobile-game makers often struggle to replicate the success of initial blockbusters. King Digital Entertainment, the creator of Candy Crush, was acquired in 2015 for a 20 per cent discount to its IPO price amid revenue declines. And Netmarble Games, the maker of the Lineage and Stone Age mobile games – and South Korea’s biggest listing in seven years – has declined about 4 per cent since its shares started trading in May.

A $2 billion valuation would translate into a $1.4 billion fortune for Mr Hed, according to the Bloomberg Billionaires Index. He holds about 69 per cent of Rovio after investing €1 million more than a decade ago into the company co-founded by his nephew Niklas Hed.

Proceeds from an IPO could also help the company fund the Angry Birds Movie 2 planned for 2019. The company’s first film in the franchise, released last year, made about $350 million in worldwide box-office sales.