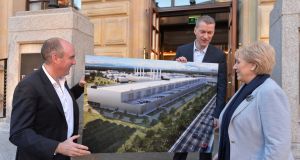 New Irish company Echelon has announced a €1 billion development of two data centres, one at Clondalkin in Dublin and the other in Arklow, Co Wicklow.

Some 910 jobs will be created for the construction phase of the two €500 million sites, while there will be 100 ongoing operational positions in Clondalkin and 90 in Arklow.

Echelon Data Centres, which is owned by London- and Dublin-based property company Aldgate Developments, said planning permission had been granted for the Clondalkin site and was “imminent” for the Arklow site.

“Growth in demand for large data centres in recent years has been enormous, but it is still a market that is under-served,” Mr Molloy said.

He cited the widespread adoption of technologies such as television streaming, “which is rapidly replacing satellite”, and the advent of driverless cars as two reasons why demand for data centre infrastructure is rocketing.

“The data required by these cars to avoid collisions is absolutely enormous.”

Mr Molloy also said he wanted to “debunk” the idea that data centres do not create jobs. “Data services are vital for Ireland’s competitiveness in attracting other cloud-based jobs,” he said.

The Minister for Business, Enterprise and Innovation, Heather Humphreys, who attended the launch of Echelon Data Centres in Dublin on Wednesday, said it was “particularly encouraging” to see an Irish company invest in a sector “that we think of as being dominated by the Silicon Valley giants”.

“Investments like this have a wider impact because they act as a hook to attract further investments,” the Minister said.

Asia-Pacific cloud companies not already based here will be among the potential occupiers that Echelon will target, the company indicated.

The two data centres will have a total capacity of more than 180MW, with the first tranche of 40MW of capacity due to be available at the Clondalkin site in the third quarter of 2020.

Their joint capacity is the equivalent of about 34 per cent of all operational cloud capacity in the State and 15 per cent of that either planned or in development.

The company is also planning additional data centres in Northern Ireland, Britain and across Europe. It said it was targeting the development of 500MW of capacity by 2025.

It is hoping to replicate in Europe a US trend whereby the operation of data centres has shifted away from tech companies such as Amazon, Microsoft, Google and Facebook to property developers who can provide the scale of capacity required by potential clients.

The acquisition of the sites was self-funded by Aldgate. Mr Molloy said “major international capital partners”, who he declined to name, had signed on to finance the construction phase.

“To ensure the successful delivery of these projects, we’re drawing on very extensive funding capabilities developed by Aldgate Developments.”

Echelon is also “in discussion” with international funds to finance the long-term ownership and operation of the completed data centres.

Aldgate came to prominence in 2013 with its Aldgate Tower project in London. It has since entered the Dublin market with two office developments under construction in Sandyford, financed by Starwood Capital.

Phase one of the construction of the 44,000sq m Clondalkin site, close to the M50, has already begun, while planning permission is expected to come through for the 45,000sq m Arklow site, known as Echelon Avoca, by February 20th.

Echelon said it had secured “phenomenal” support from the local community in Arklow. The company is in discussions with the owner of a site adjacent to the Clondalkin development on “a logistical issue” that it expects to resolve.

“Post-Apple, the planning situation has calmed down a lot,” Mr Molloy said, in reference to Apple’s difficulties in the planning process for its mooted Athenry site, which it has since abandoned.

There had been “a lot of misinformation around” in relation to data centres “putting excess strain on the grid”, Mr Molloy added.

Both Echelon data centres will be located on existing industrial sites. Echelon Clondalkin is based in Clondalkin Industrial Estate, while Echelon Avoca is located on the former Irish Fertilisers Industries site in Avoca Business Park, near the M11.

As of the end of the third quarter of 2018, there were 48 data centre facilities in the State. Mr Molloy said this number “needs to increase” in the coming years for Ireland to stay competitive.