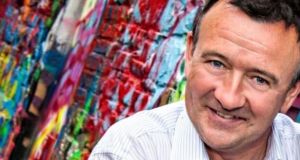 Fire founder and chief executive Colm Lyon said while Brexit-proofing the business has been a costly exercise, he also sees opportunities arising down the line.

Irish entrepreneur Colm Lyon has invested a further €3 million in Fire, the financial technology start-up he has led since the sale of his previous company Realex Payments.

Mr Lyon, who along with his wife is estimated to have made about €90 million from the €115 million sale of Realex to New York-listed Global Payments in 2015, said he had put in the additional funding to tide the company over as it seeks to Brexit-proof itself.

Fire, an online payments company that provides business and personal customers with digital accounts and debit cards, already has a payments institution licence from the Central Bank. However, it has also applied for a separate one from the UK regulator to ensure it can continue to operate no matter what happens with Brexit.

Mr Lyon said Fire, which derives about 70 per cent of its business from the UK, has invested significant energy and money ensuring it can continue to operate in multiple jurisdictions post-Brexit, including setting up a separate operating entity in the UK.

“The show must go on and we’ve had to pretty much stop everything and focus on Brexit. Our whole team is on it and there’s a huge cost involved, including opportunity costs. But given the large number of customers we have in Britain we need to be able to continue to trade there no matter what is decided in the coming months,” he said.

Mr Lyon, who has previously invested €8.5 million of his own funds in Fire, said while Brexit-proofing the business has been a costly exercise, he also sees opportunities arising down the line.

Recently-filed accounts for Fire show it recorded a €2.1 million operating loss in the 12 months to the end of April 2018. The company currently employs 25 people.

“I put in another €3 million to keep the company going because while I’m sure the time will come when we open up discussions with third parties for them to invest, we felt there was no point getting into those discussions until there is more certainly around Brexit,” he said.

Mr Lyon, who acquired the Fire platform as part of the Realex sale, said the company now has about 2,500 business clients, with customers including Grid Finance, Accelerated Payments and Buymie, the Irish on-demand grocery delivery service which this week announced a new home-delivery partnership with Lidl.

Fire has largely pivoted away from the consumer space in recent years to focus on helping businesses manage payments with digital accounts and debit cards.

“We’ve been fortunate enough to have the money to build a good platform and then added the payments stuff on top of that and identified markets where we can bring a really nice proposition,” said Mr Lyon.