Tech Review: Dolfi ultrasonic cleaner is a bit of a washout

Idea of a device you place in the sink to clean your clothes is seductive. But it doesn’t work 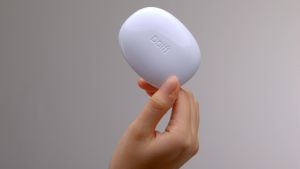 Dolfi: the device itself looks like a bar of soap, albeit a plastic one. A cable connects it to the power supply.

There is always a risk with crowdfunding a product that the project you are backing may never get made. Or that if it does get made, it is so delayed that the industry overtakes it and a once-novel idea is now the norm. But once in a while you get a really good product that actually makes it on time.

Dolfi fits none of those categories. The ultrasonic cleaner was funded four times over on its Indiegogo campaign back in March 2015, but it wasn’t until 2017 that it started to ship to early backers, beset by teething troubles with manufacturing and delivery. It got made, although it was delayed.

But it promised a lot: a device that could clean your clothes using ultrasonic technology, and all you needed was the Dolfi, a waterproof container and some detergent. Great if you are a frequent traveller and want to lighten your load; equally, if you have items that are handwash-only, you could replace standing at a sink with the Dolfi and its automatic cleaning function.

The only drawback? It’s not very good.

The premise of Dolfi is simple: it’s a portable way to tackle your laundry. Not huge loads, mind you; Dolfi is intended for a few items at a time. But you can throw it in with your clothes and walk away from it for an hour and come back to clean clothes. At least, that’s what it claims to do.

The device itself looks a bit like a bar of soap, albeit a plastic one. A cable connects it to the power supply, which has six blue lights to signify 10 minute blocks. You fill the receptacle – the sink, in this case – with water. Throw in some detergent and swirl it around a bit. Then you can add your clothes, put the Dolfi with the logo facing up in the basin, underneath it, and plug it into a power source. Dolfi will then use its ultrasonic technology to agitate the water, removing the dirt from your clothing over the next hour. It works automatically, lighting up a blue light on the plug for each 10-minute block, until it reaches the end and switches itself off. In theory, you should then pull your freshly washed clothing out of the sink, rinse it out and leave it to dry. No standing at the sink washing things, no laundry bill and using less energy – 80 times less, apparently – than a washing machine.

That did not happen.

It’s not as if I asked too much of Dolfi. For the test I used a white item that would show up dirt – or lack of it – grubbed it up a bit and spilled a little bit of hot chocolate on it just for realism. I followed the instructions to the letter, making sure the device was logo side up and perfectly positioned. When I switched on the plug, I winced; it goes against everything I was taught as a child about throwing plugged-in appliances into water. Dolfi is all sealed up though, and the fact that I’m writing this means I lived to tell and didn’t electrocute myself while doing it.

Dolfi is quiet while it’s working away. Aside from the LEDs, the only way you’ll know it’s active is you can feel something when you pick up the unit. I put it into the water and walked away. A watched Dolfi never cleans.

Five minutes later I was back. The clothes in the sink were still dirty. I poked at it a bit and walked away again. Repeat for the next 20 minutes. The only thing that changes are the lights.

After 30 minutes, most things should be clean, the documentation claims. You can safely assume this is not the case. I go watch some TV, raid the last of the leftover Christmas biscuits, and wait.

At 60 minutes, the Dolfi switched itself off. I fished the clothes out of the sink. Still grubby. The hot chocolate, which could have been removed normally within two minutes with a handwash, was still there. I’m an hour down and I ended up handwashing the clothes anyway. It both completely defeats the purpose of Dolfi and is instantly more effective.

But maybe I did it wrong. So I tried again. And again. The only way Dolfi gave me clean items was if they were clean going in. Which is neither realistic nor the point of the device, especially given the price.

I have learned an important lesson though: if it sounds too good to be true, it usually is.

It didn’t electrocute me when I dropped a plugged-in electrical device into a basin of water. (Yes, I’m clutching at straws here.)

So many things. The most important: it didn’t work. I ended up washing the clothes again, which was both a waste of water and energy. Do you know what uses less energy than a washing machine but actually gets your clothes clean? Hand washing.

If you buy this – and I’d have to ask why would you bother? – make sure you choose the correct plug option if you plan on using it in the UK and Ireland.

Don’t buy it unless you want to do most – or all – of the work yourself.

1 Coronavirus: Construction sector most significant part of new shutdown
2 Can husband keep savings and half the house in divorce?
3 Mobile, broadband suppliers to be given extra radio spectrum
4 UK needs to be honest about its Covid-19 strategy
5 British exceptionalism backfires in style as Johnson tests positive for coronavirus
Real news has value SUBSCRIBE