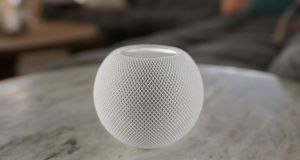 What’s in a name? Everything if you have spent a long time building a brand only to see another company decide to take it and use it for their own purposes without any acknowledgement.

That is exactly what happened this week when Apple announced a new feature for use with its HomePod speakers that allows users to communicate with other people via devices in their household. The name of this new feature? No, it isn’t iShouting, it is Intercom.

But hold on, isn’t that also the name of a successful Irish technology company? It is indeed. And what’s more, not only has Apple for want of a better word “liberated” the name, it has also come up with a new logo for it that is similar to the one used by the Dublin and San Francisco-headquartered tech unicorn.

After all, Intercom might be doing well but can it really afford to take on the world’s most valuable company in the courts?

Not only would it face a potentially long-drawn out case that would sap finances but there is also the possibility that a court might rule that as Intercom, the company, is focused on providing services to business, rather than consumers, confusion is unlikely to arise.

For now at least, Intercom is playing it for laughs with a smart and snarky tweet issued shortly after Apple’s big announcement asking Siri to play the Real Slim Shady. It is no doubt hoping that, rather than have to take on the behemoth, it might leverage the move to broaden recognition for its company name.