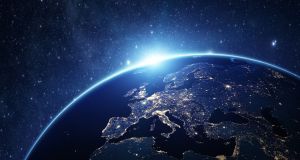 Icon will develop new space imaging technology to work in tandem with cloud-based applications to detect, monitor, analyse and characterise the sources of environmental problems across 20 EU member states.

The contract itself is worth about €500,000 to the company, but it part of a series of five projects worth about €2 million overall. Icon chief executive Tom McHugh said there was also a possibility that the World Bank would pick it up as a model to use in other areas.

Icon will work in conjunction with the EU’s Copernicus programme, which is an Earth observation satellite system coordinated and managed by the European Commission in partnership with the ESA, member states and other agencies.

The technology, called the Danube Environmental Risk Assessment Platform, will use Copernicus’s five cloud-based systems which allows users to discover, manipulate, process and download information related to changes in topography.

The service will identify industrial and transport waste discharge, agricultural run-off, and ecosystem degradation in near real-time.

“It merges sample points of data taken on site with what is seen on the imagery to see what correlations you can make,” said Mr McHugh.

“Essentially, somebody takes a sample, analyses it, and sees there is far too much nitrogen in the water. We look at our imagery and say ‘okay, each pixel there has a certain value, and look, there is more of it over there where they didn’t take sample points and will need to check.’

“So it is building up an inventory, an extrapolation if you like, of sample points taken to see if you can use that as a monitoring tool.

“If you can do it remotely like that you can cover far more ground that if you’re sending guys out to take more samples. It is also about building up a databank for the future to see if things are getting better or worse.

“It’s a very high level of accuracy. We can tell the difference between wheat and barley whereas if you were standing on the side of the road they all look the same.”

The platform is expected to be used by port authorities, environmental groups, fishing and farming organisations, the UN as well as regional and national authorities.

Icon is leading the two-year project as part of a three-company consortium which includes TerraSigna (Romania) and Geoville (Austria).

Icon Group has experienced considerable growth over the last several years, winning contracts with the Department of Agriculture and the ESA to monitor crops, hedgerows and track wildlife disease across Ireland and Europe.